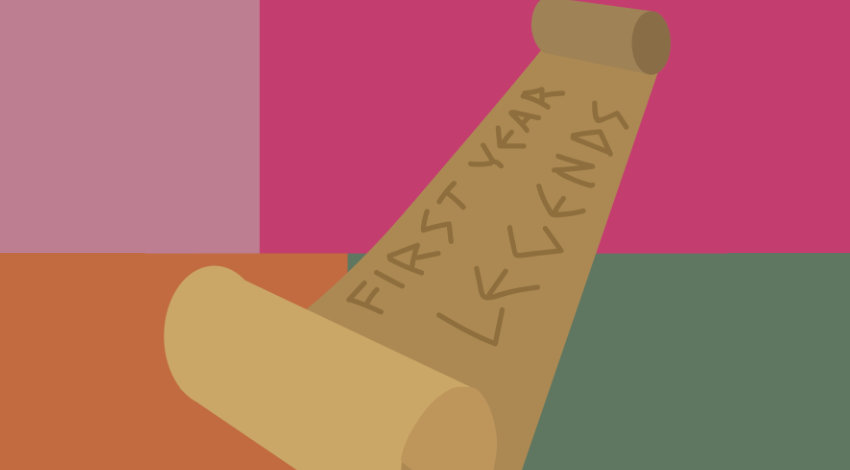 It’s often said that the University of Auckland has no culture. There isn’t an obvious identity like the Otago couch burner living on Castle Street, or the trendy Victoria student wearing extraordinarily baggy jeans. Some people say that the uni has a culture, it’s just not a good one. Others say that AUT is better. There’s probably a little bit of truth to all these statements (except the last one).

I think the notion that UOA has no culture can lead a lot of students to think that valuable experiences can’t be found on campus. That, even if you’re a student here, to form lasting memories they’ll have to be created separately from your university experience.

The stories that we tell of our time at UOA help to articulate the culture and life that is present on campus. To help new students understand what the university is really like, it’s important to put our first year legends to print. Students have bravely shared some of their stories of partying, studying, and life in general at the University of Auckland, to represent the good, bad and ugly of our uni. Maybe not all of them appear to be valuable experiences, many being embarrassing and awkward, but they are valuable to the holder of those memories. They are the legends of their time studying that they will retell, now and in the future.

The moment after I finished my first exam, I felt a sense of relief I’m sure everyone is familiar with. I thought I had done quite well, most of the questions being closely aligned with what I had studied for. I double and triple checked my answers, and when the supervisor told us to drop our pens, I was one of the first out the door. On the bus trip home, I couldn’t help but talk with some friends about the questions and what we had written. As we pulled the question sheets out of our bags, my heart stopped. I had written my answers in the question book instead of the exam paper. None of my correct answers would count. The feeling of disappointment was brutal, my grind for the year felt like a total waste due to an embarrassing rookie mistake.

It was early on in my first semester at uni, and I had a big essay due on a Friday. Being who I am, I didn’t start it until the day it was due. I quickly realised I was putting garbage onto the page, and decided to take the 5% penalty hand in on Monday. This probably was the right decision to make at the time. The problem came when, instead of working on it all weekend, I thought I could fit in a cheeky bit of drinking. This was a mistake. The assignment entirely slipped my mind. I remembered it at the last moment, right before the cutoff, a week later. I handed in the garbage I had written on Friday, while also taking a 50% penalty. To add salt to the wound, I got one of my best grades that semester before the penalty. I’m not a hypocrite, you don’t have to be entirely organized. But please, be more organised than me.

Every student at some stage has to walk into the wrong classroom. It’s a right of passage. One day, I was walking to a tutorial and bumped into someone I knew. We chatted, and I ran to class thinking I was late. After bursting in I realised I was early, and the tutorial before mine was still in session. Panicked, with all eyes on me, I put my phone to my ear and said “I’m in the class now but can’t see anything,” and began looking under the desks. The tutor asked me what I was doing and I told her my friend had forgotten her phone. The whole class began looking under desks too. Obviously they didn’t find anything, so I thanked them and exited, still on my fake phone call. If I had slowed down before entering the classroom, I would have noticed my peers waiting outside, who were now staring at me, very confused. I hid in the bathroom and was late for my own tutorial, just to make sure those helpful students had well and truly cleared out.

A few of my friends decided it would be fun to play strip basketball on our very public outdoor court. The game ended with its participants streaking through our dining room. Unfortunately, some other students decided to tell an RA, and these boys were kicked out of the hall. To be fair, they had been warned for previous drunk behaviour. This time around, there wasn’t a meeting or a discussion – they were done. The four of them were kicked out of the hall with only a couple of weeks left in our stay. One of them bravely decided that it wasn’t his time to leave yet. He didn’t have anywhere to go where he wouldn’t be scolded by family, so he thought that his best course of action was to hide in the building. He spent his days in stealth mode, and at night he slept in vacated rooms or on his friend’s floors. He must have been pretty good at it – he never got caught.

One night, a girl in my hall had a few too many drinks. She vomited a tremendous amount, with most of it ending up on the bathroom floor. She then attempted to clean it up with a towel. A towel. She then put it in the washing machine, where it was forgotten about entirely. The next morning, someone else put their own laundry on. They realized what had been through the machine previously, after picking tiny bits of broccoli out of their clothing. It didn’t take long for this to spread around and the poor girl was told off by our building manager. In fact, I was the only person on the floor that didn’t hate her. I thought it was so funny. Don’t get me wrong, unbelievably gross, but yeah, pretty hilarious. So, 9/10 experience. At some point, live on the same floor as someone who doesn’t handle their alcohol well. Just mind your step. And your laundry.

My fave night began as a classy gals night at the Spicy House on Dominion Road. We were trying to see which one of us could eat the most dumplings in one go. I was crowned champion after eating at least 12. After packing our guts full we went to everyone’s favourite spot on campus, Shadows. Shitty pop music and cheap beer really is the way to my heart, and no O’Week is ever complete without a bit of Savage (even though the man only sings 3 songs). So to keep tradition alive, we showed up, and danced for an hour. Just before we went home, we decided it would be worth it to down 4 jager shots to win a beloved Shads t-shirt. I wore that shirt to class on Monday, with pride. I began to regret it when I started getting judgemental looks. But looks be damned, it really is one of my favourite shirts.

Leaving my small high school and starting at university meant that, after a bit of soul searching, some hard truths, and some self-honesty, it was time for me to come out. My family and friends were all accepting – sharing laughs, hugs, tears, and words of affirmation. Making me know that I was loved for who I was (and who I loved). Meanwhile, navigating dating at university

was a minefield. I turned to Grindr. Where else could I pick out my fellow gays from the crowds? Whilst my efforts to find a boyfriend were to no avail, my search did provide me with a bit of entertainment whilst hanging between lectures, including a very sneaky ‘off-campus visit’ I made one day in a gap between classes. They say university is where you can be who you want to be – and for me, that’s how I felt. But looking for love between library books and lectures, whilst an exciting and new sensation, didn’t prove successful. Ultimately, I found my match the old-fashioned way – eyes meeting across a dance floor on a Saturday night. I like to believe that maybe the moral of that story is that, to find your match on campus, you should take your eyes off your phone. Put your head up and meet people. You never know who you might find.

These are stories from the University of Auckland students living out their first year at our university. They aren’t the same as students from Dunedin or Wellington. They may not have a stereotype attached to them, but that doesn’t make the university experience any less valid. We don’t have a super recognisable culture here, but that doesn’t mean there isn’t a lot going on. Our university is bound to be different. It’s hard to have that distinctive image or a close community when our school has almost twice as many students, is located in a much larger city, and is spread out across different campuses. Ask students at other universities – they might resent the culture of their school and the stereotypes of students in their town.

The University of Auckland is a diverse place, with even more diverse experiences taking place within it. There isn’t a ubiquitous uni culture, but that doesn’t mean there aren’t valuable things happening and amazing experiences to be had. So to all first years: go live out your stories (they don’t have to be failing academically or drinking, like most of ours are). In Auckland the first year is whatever you make of it. Make memories in your first year and re-tell them in your years to come. Or say they happened to a friend, if that’s less embarrassing.