What Beautifully Cringe ‘00s Fashion Icon Are You? 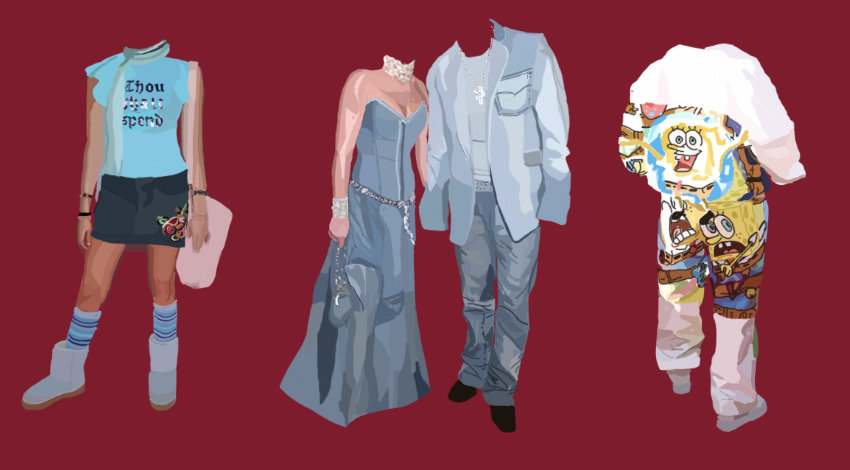 Those whose adolescence covered the early ‘00s are fiercely protective of their nostalgia in a way that is rivalled only by the boomers, with their recollections of the golden age of capitalism and the longings for the faint taste of lead in the air. Having come of age at a time where 9/11 was something that had happened, but not being old enough to remember The Times Before, we occupy a little spot between the now-aging millennials and the Totally Communist zoomers, and we will fight to the death over defending the now-fuzzy memories of our childhood years. As such, Craccum dedicated an entire issue to covering the vague topic of ‘nostalgia’, in a desperate attempt to appeal to our shut-in readers during yet another lockdown, all during the end of the Western empire. Long live the ‘00s! Do we truly remember how we looked at the time – or rather, how our older siblings and their celeb idols looked at the time? Have we truly internalised their glory? With this quiz, maybe you can dig up a few of those memories, and do a little bit of stolen valour and relate them to yourself. Have fun!

‘00s style icon bar none & Disney superstar Ashley Tisdale – from her initial four years of fame – walks past you. She’s happy with her life, secure in her millions and fan adoration. How fucked up is her outfit?

A) She’s wearing a light red one-piece dress OVER her bedazzled jeans WHILE sporting a dropped denim mini-jumper on top of it. Powerful stuff.
B) Ashley Tisdale is no longer, for the being that once was Ashley Tisdale has been subsumed into the newly sapient entity known only as ‘bell-bottom jeans and Hello Kitty slippers.’
C) Her teal ribboned t-shirt, always teal, always covered in some forgotten brand tagline, is psychically communicating with the cyan bead necklace and chartreuse UGG boots.
D) Her feathered boa is tangled in her not-quite-Stevie Nicks scarf, slowly but surely becoming one item forevermore.

Which banger is THE banger?

How are you letting all the unpopular bitches know you’re in fact the coolest, and that Jared isn’t interested in them ‘cause they’re fugly?

A) True Religion flared jeans
B) My lace canary-coloured tank top over my olive t-shirt? How else
C) What, you think my girls don’t know their place when I step out in my tiered miniskirts?
D) Julius the Monkey shoulder-bag that my nana got for me at Christmas 2003

Take a breather. In the pre-social media age, what do you do to pass the time?

A) Shoot the rubber bands on your braces
B) Wait three hours for a Youtube video to load
C) Uh go outside bc I have friends lol? The fuck you mean
D) Read books…? (Remember reading for fun? What)

It’s 2004. You’ve been told to wait in the magazine area of Countdown and occupy yourself while the adults are shopping. What do you read?

You just walked past Gwen Stefani in her prime years of fame. She’s just begun a solo career, and is racking up hits by the month. She’s beautiful, and ‘Hollaback Girl’ is just around the corner. What is her racist apparel?

A) Still got that bindi glued to her forehead like no other
B) She just finished emulating what she thinks is chola-wear, cautious to never actually go where she thinks people who could tell her otherwise might be
C) She’s not wearing anything racist but she has the Harajuku Girls on a dog leash and is berating them for asking her to please let them go home
D) A Cree headdress. Yeah, it’s a bit later than the ‘00s but….. Like, what was that video?

Nowadays, what stays on during sex?

A) We’re fucking through the FUBU, baby
B) The bootcut jeans
C) I’m not taking off the Juicy Couture velour salmon-coloured tracksuit
D) The Von Dutch Hat

You’re been dropped through a time portal over ten thousand years into the past, and you can only present one item to a marauding caveman group on the cusp of developing concepts like ‘society’ and ‘not shitting where we eat’, in the hopes that this item will guide the oncoming human civilisation to a brighter tomorrow. What is that item?

A) Your yellow candy-coloured aviator
B) White low-rise jeans with a studded Ed Hardy belt buckle
C) A nameplate necklace (you know, the kind that’d spell out your name in golden cursive)
D) Distinctly oversized jumpers and sweatpants – unbeatable in both fashion and relaxation

Mostly As) Britney Spears & Justin Timberlake – Even in your failures, you can occasionally turn out the most glamorous of the lot. While some may look back and ask ‘how?’, only those who are worthy of your time will look back and ask ‘why not?’. You aimed high, and sometimes your aim was as true as your spirit. Let your denim flag fly, you’ve earned your accolades. Also, #FreeBritney.

Mostly Bs) Ashley Tisdale, The Queen – You’ve heard all the names. ‘Hot mess’. ‘Bird bitch’. ‘Shambles supreme’. But you live it, and do it with a smile. Because at the end of it all, when people look back, they’re not thinking of those who stood with the crowd and jeered – they’re thinking of the girl who stepped out in the bedazzled Hello Kitty sleeping mask, no matter how the Ritalin tried to hold you back.

Mostly Cs) Da Brat’s Legendary Spongebob Ensemble– You turned it out, honey. Your ‘00s experience was one of adventure, and almost lethal tackiness. But tacky always has a home somewhere, and with high risk comes great rewards. You kinda won!

Mostly Ds) Anne Hathaway, Period – the Inverse Tisdale, you were insufferably bland. A true embodiment of those who tried, but could not. Those who had a flip phone, but no one to text. I’m glad you were bullied, actually. Suffer.