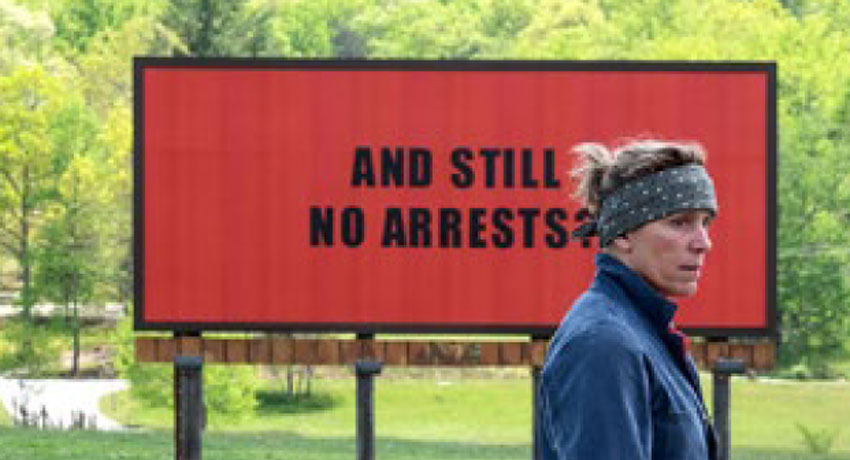 A grieving mother (Frances McDormand) whose daughter was raped and killed goes on a one-woman crusade against the county police who failed to solve the case. Her choice of weapon is three abandoned billboards on a lonely country road which she uses to call public attention to Chief of Police, Sheriff Bill Willoughby (Woody Harelson).

This film is set in a quiet rural town in Midwestern United States, a landscape that serves as a stark contrast against moments of sharp humor and raw violence – often catching you off guard. This makes for a wonderful mix of emotion played out on a beautiful country backdrop, a balance that is just right to hold your attention throughout.

What is refreshing about this film is director Martin McDonagh’s portrayal of what is “right” and “wrong”, concepts which are presented as more fluid then binary in order to highlight the often ambiguous morals of humans and our scope for change. The characters in this film appear to be firmly set in their own judgements of the world around them which makes our witness to their character development even more satisfying as they encounter moments powerful enough to affect their values and goals.

One central theme throughout the film is that of grief and it is one that is rather poignantly expressed through moments of dry humor, awkward encounters, stark confrontations and tender family moments. This leads to heartfelt moments across the board that often remind us that while our intentions may be noble, we all fall victim to our own vices from time to time.

At the core, this film lays bare the complexity of humans through the injustice that touches even in the smallest and remote towns of America. Violence, humor, tradition and transformation build upon one another to present a film that is both beautiful, raw and confronting.