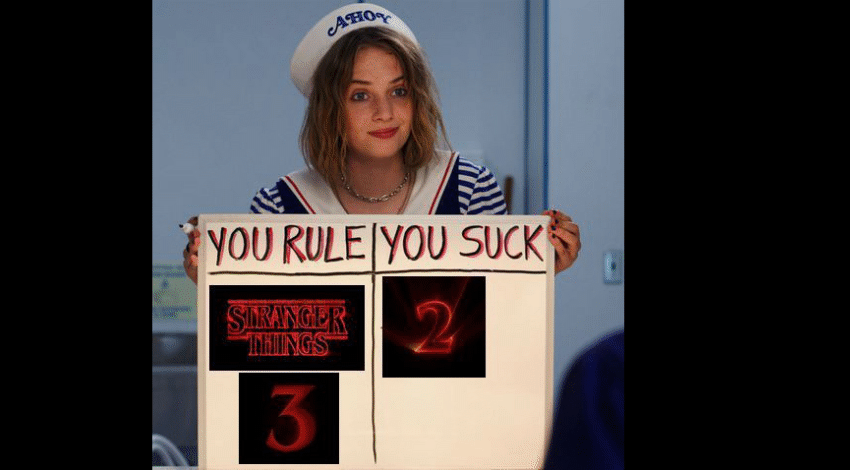 It’s the summer of 85’ in Hawkins. Single mother Steve Harrington is hardly enamoured with his new profession as an ice-cream scooper at ‘Scoops Ahoy!’, police chief Jim Hopper isn’t happy with Mike and El’s blossoming relationship, and Joyce’s magnets won’t stay on her goddamn fridge. You’d think after fighting demogorgons from the Upside Down these guys would catch a break, but Hawkins is alive and miserable as ever, and thus Netflix’s favourite cash cow returns for a third, eight-episode season.

It’s the return of the Upside Down, this time brought to you by the Soviet Union of all people. Evil Russians are lurking around Hawkins, and its up to the crew to figure out for what. This season, the show gives all of its established stars the room to shine, and shine they absolutely do. The candidates for season standout would likely include Dacre Montgomery as an unhinged and vulnerable Billy, who becomes the new host for the Mind Flayer, and David Harbour with a strong, emotional performance as a temperamental Jim Hopper, who as a single parent starts to resemble Joyce more than the old police chief we’ve come to know.

For its third run, the show does a stellar job harmonizing its different characters’ storylines, which is all the more impressive given the show adds to its already vast ensemble cast this season with the addition of Robin, played by Uma Thurman’s lookalike daughter Maya Hawke, as Steve’s scooper wielding sidekick. Join them with summer outcast Dustin Henderson and Lucas’ apathetic little sister Erica, and you get one of the standout plots of the season. The team’s dynamic makes it hilarious and entertaining at every turn, and without giving too much away, I can say Steve and Robin manage to get more parenting done in one season that all the parents seem to have done over the entire show (excepting Joyce, of course).

However that’s not to say that plot weaknesses don’t exist though. For example, the story with the lifeguard Heather doesn’t do a whole lot to improve the episodes she appears in. Also, minor characters such as Mrs. Wheeler and Mr. Clarke drift in and out through the series to advance the plot, but their scenes are mostly forgettable. Of course, this does not apply to a certain supporting character in the second half who was a genius addition from the writers. Also, while the show is most definitely not the corny trash that our Art’s Editor Lachlan Mitchell believes it to be (let him know what you think about that at arts@craccum.co.nz), I begrudgingly admit that oftentimes the satire does transcend the line into cliché.

But despite Lachlan’s negativity, the show certainly overwhelms with positives. The set design is extraordinary, and Starcourt Mall is surely one of the best designed sets from any series. The cinematography is excellent, and the producers often feel confident enough to let the camerawork convey the story. And on the topic of story, it’s hard to imagine that any Netflix show will ever top Stranger Things. The interweaving storylines all manage to be fast-paced and exciting, while they each stay unique and independent enough to remain interesting. Stranger Things takes the same approach as last season – keeping the main characters separate until the final showdown – and by teasing viewers to chase for the final battle, it again proves to be a winning formula, which will leave you questioning how you managed to finish the entire season in only one night.

The Duffer Brothers have taken a Netflix mainstay and somehow made it even better for what could have easily been a throwaway third season, especially when a fourth was all but guaranteed. The response has been nothing short of tremendous; with over 40 million households having watched the show 4 days since its July 4 debut, it’s no doubt Netflix will treat these kids to truckloads of cash.  Not bad for an ice-cream payday, right Steve?

NB: I realise that I’ve finished an entire review of Stranger Things without mentioning the main cast of kids at all. Well, maybe I wouldn’t have forgotten about them if they hadn’t forgotten about Dustin.