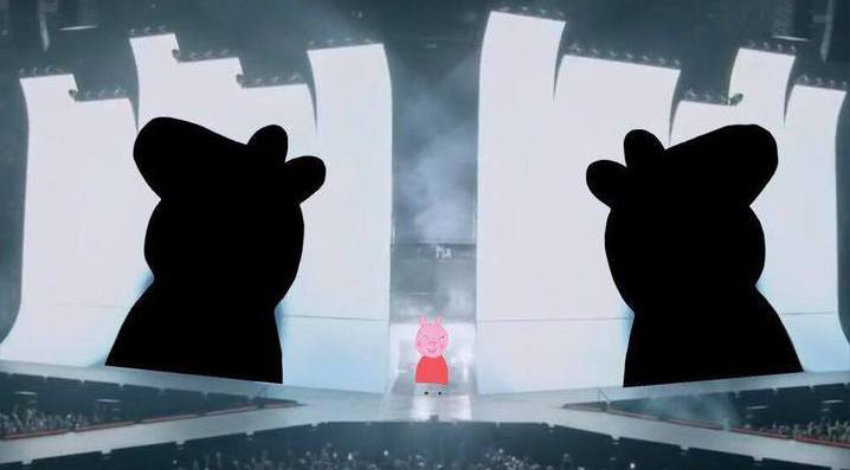 Peppa Pig, one of the most promising and rebellious figures to hit the British music scene since the height of Brit-Pop, introduces us to her intimate yet uninhibited side of her. This album starts off with the track “It’s Peppa Pig” – a perfect introduction to her first full length project. This is, without a doubt, the cleanest debut single I have ever heard. While the opening jingle is familiar, the choir that follows subverted my expectations thoroughly. She may share the same label as Azealia Banks, but ‘It’s Peppa Pig’ shows an uncompromising belief in self that solidifies Peppa Pig as a lyrical star unchallenged. Find me a debut single with lyrics that hit your ears harder than ‘Walking on two hooves, stomping the runway. Don’t care if I’m not kosher, see if you find a badder bitch. I’ll wait.’

There is a number of features who make an appearance in this album: Miss Rabbit, Madame Gazelle, Mommy, and Daddy Pig and even her brother George. To be honest, I am not that much of a fan of this ‘feature culture’ where the guest appearances are hollow and the collab is soulless. But this is not the case for Peppa – indeed, Madame Gazelle brings a life to ‘Bing Bong Zoo’ that ensures that it is a diamond, attesting to Peppa’s ability to carefully pick only the most inimitable collaborators. The epitome of this trend as a negative would be Ed Sheeran’s latest drop ‘No.6 Collaborations Project”. Given that Ed’s album solely relies on collaborations which unsurprisingly reveals that Ed is chasing after ‘clout’ from other Big Names in hip-hop, I think it is suffice to say that Peppa’s feature list is a great juxtaposition. Peppa Pig has no need to chase anything; success chases her.

Putting it simply, this album is an instant classic. It has everything it needs; from the experimental and dynamic SOPHIE production, smooth transition between tracks (‘Expert Daddy Pig’ and ‘Rainbow, Rainbow’ in particular) and unparalleled expertise in choosing song partners, what else do you want? Another DJ Khaled project with obnoxiously boring and soulless tracks? Or possibly another super-saturated blend of sound brought to you by K-Pop groups who have decided to sacrifice their childhood to be the next new hot thang? The only question I have left after this album is how not many Grammys she’ll win in February, but who will dare to nominate themselves in any category Peppa Pig is eligible for.