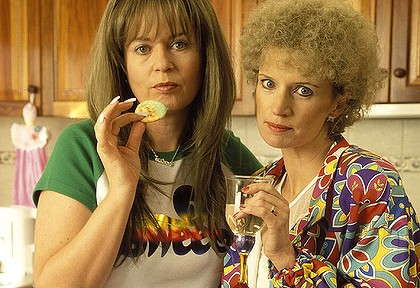 I thought that we could have a little review of old media, Something we all might know about, but may not have necessarily watched in the last few years or even the last decade. In this case, I think the perfect topic is Kath and Kim.

I’ve recently been rewatching the show in small increments after Netflix graciously added it to its New Zealand archives and honestly? It still holds up. The complaining about John Howard may confuse newer viewers who may not have an idea of who he is, but this existed in an era where Australian government had the veneer of stability. A lifetime ago for most of us. Otherwise, the delicious ‘00s nature of the show doesn’t age upon viewing it with our 2019 glasses, and it’s still as delightfully quotable as ever. Now that Magda Szubanski has been out of the closet for the best part of a decade, there’s a fun element to Sharon’s sycophancy to Kim that wasn’t there on the original viewings, and it only serves to make the show more endearing.

While I write about this as an unashamed gay male, the show was a pop culture phenomenon for a reason: the inherent selfishness and obliviousness in all the characters speaks to all of us, whether we like it or not, and we all want a little laugh at bogans. As a born Westie, I know the feeling. The show is never mean-spirited, it’s just poking fun at a cultural reality.