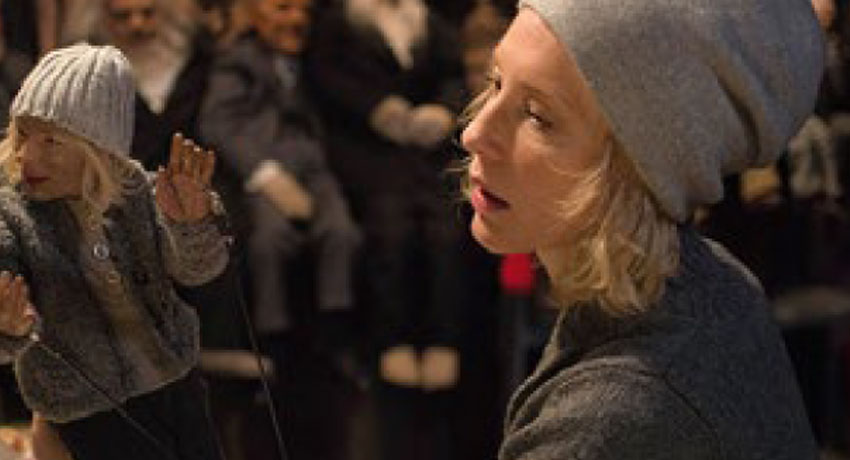 “All current art is fake,” announces a news reporter, staring directly into the camera. German artist Julian Rosefeldt’s artwork Manifesto, starring the enigmatic actress Cate Blanchett, has arrived at the Auckland Art Gallery Toi o Tāmaki – and deserves to be seen (and experienced) by art and film fans alike. Each video work focuses on a different manifesto stemming from different “isms” in history, such as Marxism, suprematism, conceptualism, situationism and Dadaism, as well as the film manifestos of Lars von Trier and Jim Jarmusch, and art movements such as Pop art.

Thirteen screens are suspended in a large dark room, with each of Blanchett’s diverse characters taking up one screen each. Here, she transforms into a number of different roles, including a scientist, a teacher, a choreographer and a homeless man, each character more intriguing than the last. Blanchett’s incredible acting abilities are at their full capacity as she recites the arduous and sophisticated dialogue of each manifesto, which are interesting enough to read on their own, but are given another dimension in Rosefeldt’s video format that makes their authors’ words seem heavier and more mesmerising. Each video segment lasts ten minutes and thirty seconds, with a climax syncing across all thirteen screens at the same time, creating an immensely immersive, albeit overwhelming, experience.

Rosefeldt has stated that the arguments and declarations of Blanchett’s characters are more pertinent than ever before, stating, “People are rereading the manifestos and starting to write their own. In this time in which we are living, populism is feeling like a disease taking over the planet.” Manifesto is an incredible work that art and film fans will deeply appreciate, but is also deserving to be seen by those not familiar with the manifestos or those who wrote them. Take an hour out of your day to experience this relevant and important artwork at the Auckland Art Gallery now.