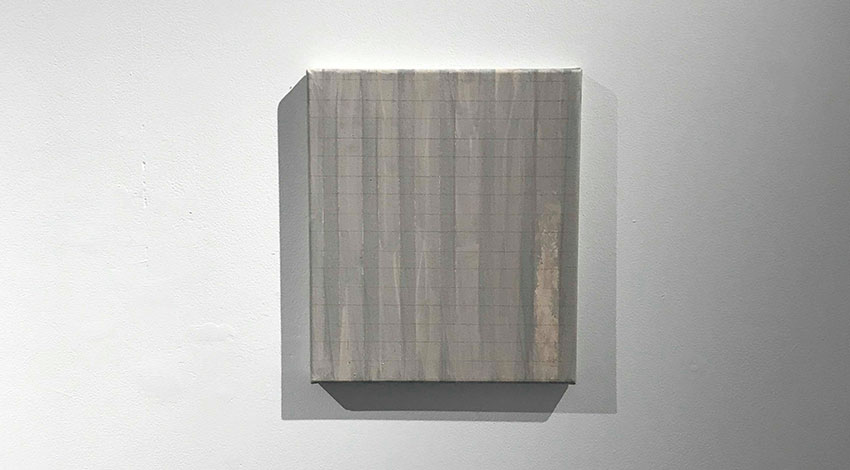 The four works at the heart of Unbecoming are all occupied with the artificial separation of what we’d traditionally call “craft work” – a term which covers a wide swath of art practise, and includes things like knitting, sewing, embroidery, and dye work – with “high art”.

Albertine Lello does this by using craft practises to create “high art” works. Her canvases are each dyed with hand-made ink, giving them a soothing quality that contrasts with the formality of the canvas.

In many ways, Caitlin Watter’s pieces then form a nice response to Lello’s work. Watters’ actually provided a number of different items for the exhibition, each with a deeply personal history.

Her loom, for example, sits on a bench in the middle of the gallery. The scarf of the grandmother’s who introduced her to craftwork sits next to it. A quilt, made with that loom, is draped across a chair, underneath photographs from the NZ Archives of Women’s Work.

The nature of the pieces mean that their inclusion has the effect of making the gallery seem more domestic and welcoming – Lello’s work, by contrast, attempts to generate a more deliniated, “traditional” gallery atmosphere. The co-presentation of the two pieces creates interesting tensions within the space.

The final two pieces explore themes personal to their respective artists. Olivia Stewart, (Ngati Manu, Nga Puhi) uses her work to explore her dual European and Māori heritage, by combining traditional Māori materials with European form. Her piece for this exhibition – Muka, dyed red and woven into bedsheets, and then seperated into nine strips and hung from the Gallery walls – is striking, dominating much of the gallery space, while remaining intimate.

Finally, we have Indigo Poppelwell’s embroidery – which is impressive even just when engaged with in terms of the sheer detail she’s managed to achieve. Pulling from the work of french feminist philosopher Hélène Cixous, Poppelwell’s work trades on the image of Medusa-as-feminist-symbol, as presented in Cixous’s work.

Poppelwell’s piece is the most overtly political work of the group – Cixous’s Medusa is meant to symbolise sheer rage at patriarchal cruelty.  It’s inclusion challenges visitors to think about the context in which we think of the other three – and all four works challenge us to re-engage with the way we think about “craft” and “high art” as a whole.