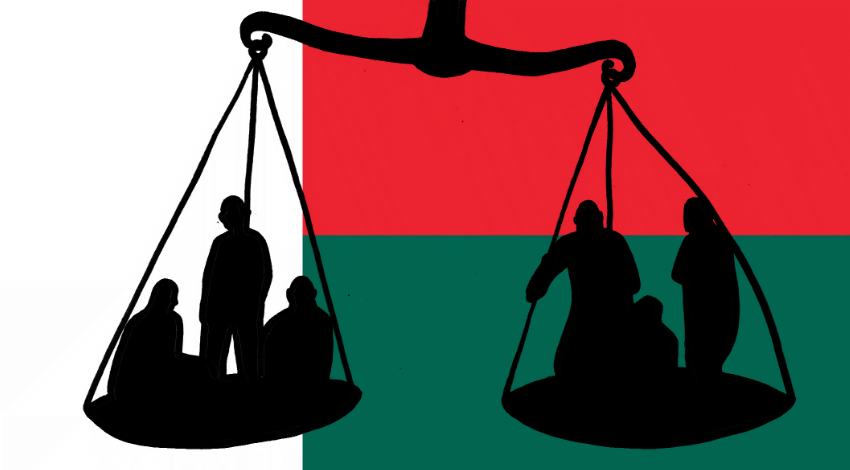 “But I’m not guilty…there’s been a mistake. How is it even possible for someone to be guilty? We’re all human beings here, like the other”. “That is true” said the priest, “But that is how the guilty speak”. Franz Kafka’s The Trial follows the story of a man arrested with no word of his charges, not knowing when – or if- he will get out.

Madagascar, behind the impression of the bouncy and comedic animated film of the same name, reveals a shattered reality, one sadly similar to that of the Trial. The phenomenon of pre-trial detention is the focus of a current 2019 Amnesty International campaign and a 2019 Unreported World episode investigation of UK’s Channel 4. In addition, Madagascar has faced scrutiny from the United Nations Human Rights Committee on what was reported as the excessive use of police force. The death of a student in police custody last month is a reminder of the cruelty of this ineffective punitive system and is a sharp cry for the world to pay attention.

What is pre-trial detention?

Pre-trial detention is a process by which an individual is detained to be questioned by police prior to being charged. Amnesty International reports that as of October 2017 55% of the prison population are pre-trial detainees. As a result, prisons are overcrowded and inmates face unhygienic conditions. Dozens of people are crammed into cells, with only so much space to lie down, horribly reminiscent of diagrams of slave boats of the Trans-Atlantic slave trade. In many countries around the world, once deemed a criminal, you are ‘fair game’, an ‘acceptable’ target. And especially in nations with poor internal governance and accountability in their justice system, it’s open season.

The process of a fair trial considers the facts of the accused’s situation, legislation on crime and public order as well as previous precedent on analogous cases. A fair trial is meant to ascertain if you committed the crime and the corrective measure by the law. Having a fair trial is crucial to maintaining open justice – that is, fairness and transparency in the justice system. This is the rationale for having a free trial as an inalienable right. Once this right is gone, an individual is subject to the whims of law enforcement and the unjust exercise of power. It follows that those subject to pre-trial detention are not proven criminals, but victims of a system that violates international human rights standards.

How are people affected by this?

One might echo, “but that is how the guilty speak”, or state that human rights are some sort of guise that prevents punishment, but the reality is that pre-trial detention targets the most vulnerable in Malagasy society. Do you recall the story of Jean Valjean? The story of the protagonist of Les Misérables has an important moral lesson. A convict, not of choice but rather circumstance, stealing in a dire economic situation, referenced in 1992s Aladdin with the phrase, “all this for a loaf of bread?”. Pre-trial detainees held were from poor, rural communities, uneducated on their legal rights. They trace their arrests to incidents of petty crime, with a 12 year old detainees for example, detained for stealing poultry. Pre-trial detainees do not just include the general image of an adult male offender, many are women and children.

How does this violate human rights?

With no trial, detainees are imprisoned indefinitely, often staying in jail for more than what would have been one’s sentence. This is far from transparent punishment and is disproportionate to any petty crime. Detainees surveyed by Amnesty International stay in jail for years for accusations of theft. These are years of your civil liberties stripped from you, staying in squalid conditions, broken and humiliated.

Detainees do not receive medical care or food, for women detainees, they do not receive sanitary products. Detainees also do not know if their family knows of their arrest or have any way to contact them. The solution? The only way to get food provisions or external contact is through bribery, a sign that pre-trial detention perpetuates corruption in prison Settings.

Showers? Toilets? What has been described by NGOS visiting Malagasy prisons is a situation with toilets that don’t work, an “open sewage system”, which leaves detainees exposed to risk of disease. According to Amnesty International, lawyers working for legal aid in Madagascar are actively prevented from acting on behalf of pre-trial detainees. The kicker? The Malagasy Constitution and Code of Penal Procedure state that pre-trial detention is only to be used as an “exceptional measure”.

This ‘exceptional measure’, used so frequently and cruelly, encourages a cycle of poverty and trauma. There are no skills taught in Malagasy prisons or vocational activities to allow them a foundation for employment. Those who leave jail have lost their jobs, but more so, their morale to be able to return to regular life after what can only be described in Article 15 of the Universal Declaration of Human Rights as “cruel, inhuman and degrading treatment”.

Why does it happen?

Martin Schönteich of the Centre for Crime and Justice Studies notes that pre-trial detention is prevalent in countries with corruption and where the public is not educated of their rights. Targeting uneducated communities and youth means that those in positions of power can exploit this lack of knowledge. Weak internal governance and accountability means that the police have unbridled power to arrest and detain. Bribery may also act as an economic incentive, bribes to ‘pay’ for provisions in jail, bribes to get out of jail, bribes to detain certain individuals. The effect? Transparency International states that corruption is the major obstacle to the rule of law. They also state that corruption creates a long-term distrust in a nation’s ability to make positive social change.

Madagascar has a problem with petty crime, but once individuals are dehumanised and seen as separate from the social context that creates crime, this allows for their civil liberties to be eroded for the pursuit of public order. Indeed, Madagascar has seen this happen with the emergence of ‘vigilante’ incidents of groups taking matters in their own hands against thieves. And as I have discussed, the erosion of civil liberties through Malagasy institutions. Imprisonment does not cure a problem, as long as social and economic problems continue, so does the cycle of imprisonment and ill-treatment for the following generation.

What can we do about it?

New news is emerging of the situation of Madagascar but remains in the circles of NGOs, reaching them and being able to share public awareness is key to being able to take a stand against human rights violations. Unreported World’s episode, “Madagascar teenagers: Jailed without trial” is a good place to start as well as Amnesty International’s documentary, “Punished for Being Poor” and information reports. My group, Amnesty on Campus also aims to distribute updates on our Facebook page ‘Amnesty on Campus UoA’, where a petition link is also available.

Most importantly, we can take inspiration from one line of Kafka’s The Trial: “We’re all human beings here, like the other”.