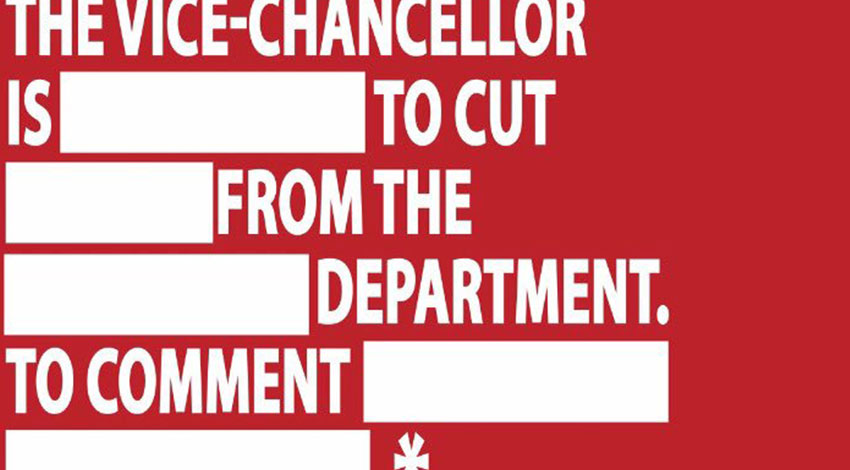 Last Wednesday saw the launch of the “Don’t be Silenced” campaign by the Tertiary Education Union.

This article will talk about two things in respect to that launch; firstly, the campaign itself, and the ongoing strife surrounding the University’s approach to “Change Management” processes, and then secondly, the actual campaign launch itself.

What is the campaign about?

“Change Management” is a broad term for the process of review and consultation that any large organisation goes through when making decisions about corporate strategy and labour deployment. Staff members who engage in that process are typically asked to sign a set of legal documents, relating to the rights and responsibilities that they have as a part of that process.

Last Wednesday’s protest was in response to changes to the language contained in those documents, implemented by the University earlier this year. The updated documents specifically prohibit staff members from talking publicly about the review process – a change which protestors contend unfairly restricts their broader rights as academics to publicly comment on University operations.

According to the updated language, staff members have an obligation to report all feedback “directly to the Review Committee, in accordance with the process set out in the Proposal”.

They are told that this obligation “is not overridden by academic freedom, which must be exercised within the law”, and is a component of their “contractual obligations of loyalty and fidelity owed to the Vice-Chancellor”.

The University insists that this is normal behaviour for such a large organisation.

In a public letter issued in response to criticism from the Tertiary Education Union, Auckland University Vice-Chancellor Stuart McCutcheon has said that he considers public criticism of the University during restructuring to be “contrary to accepted legal consultation practices”, and that engaging in “widespread public consultation” not only isn’t current University policy – and would need to be implemented through proper procedure – but would also need to be weighed against increased uncertainty for staff, and longer timeframes for consultation.

What happened during the event?

The launch itself was a “teach-in”, with a number of academics from the University of Auckland and representatives from the Tertiary Education Union speaking about why they felt that removing the offending language from the relevant documents was important.

The controversy, ultimately, was the fact that there was a police presence at the event. Four uniformed police officers – called by Campus Security – were present for the duration of the launch, despite the fact that the Tertiary Education Union booked out the space legitimately.