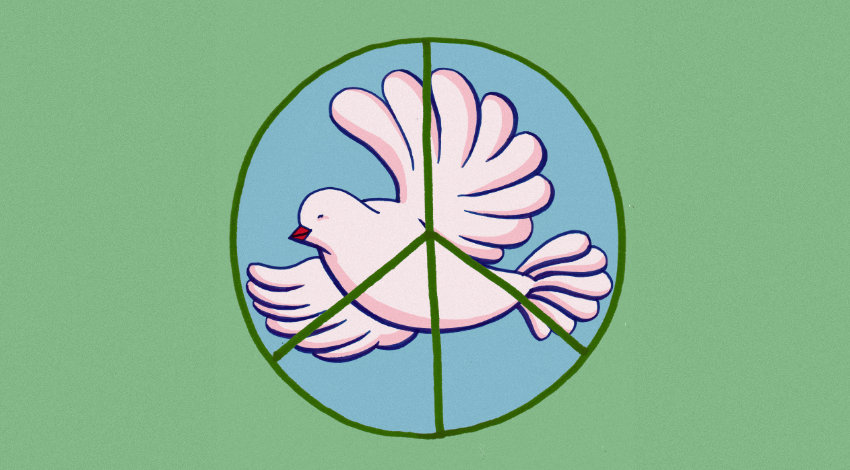 War! What is it good for? And indeed, what is it good for? The words of this protest song may very well be relevant even today. In light of aggressive foreign policy and international stalemates over banning nuclear weapons, a May 2019 article by Reuters quoted an armour-piercing observation by U.N. Institute for Disarmament Research director, Renata Dawn. The risk of nuclear war is the highest it has been since WW2, with nuclear weapons seemingly used as a political pawn.

With lives on the line as with devastating consequences for our planet, it is worth raising that the horrors are beyond the Chernobyl show but already observable and never to be repeated, Marshall Islands, the Pacific, parts of rural United States have had their environment, infrastructure and plant life totally irradiated, leaving wastelands and irreversible damage and trauma. With Cold War-esque furore in the air, synthpop on the charts and a steady roll of global tensions, perhaps a can of hairspray is enough to make this the 80s? But we remember these times too for optimism and youth spirit. In searching for answers to the disarmament debate and hearing Lucy’s inspirational words, the song line from 99 Red Balloons comes to mind, “everyone’s a superhero, everyone’s a Captain Kirk”.

Perhaps it is worth looking into New Zealand’s protest past for hope for the future and understandings of how to critically view matters of war and peace and to find our sense of initiative. I interviewed Mrs Lucy Stewart of the Disarmament and Security centre. They are a team of activists, students, educators and experts who aim to raise awareness of disarmament issues, the importance of disarmament in today’s political arena and who facilitate educational opportunities for research and discussion.

Describe your job in three words.

What is disarmament and does it have a role in understanding current events?

Disarmament is the concept that weapons don’t make us safer – in fact, they make us less secure. This is especially true when we are talking about particular types of weapons, for example weapons of mass destruction, such as Nuclear, Chemical or Biological weapons as well as other banned weapon types, such as Landmines and Cluster Munitions. But it is not only the weapon type, it also applies to the level of spending and investment in weapons systems and the amount of weapons a country or group has in its arsenal. Excessive build up of arms leads to instability as it makes other countries feel threatened, whom then often retaliate with their own arms build ups – hence the term the ‘arms race’. Absolutely, the concept of disarmament has a role to play in current events – one only needs to look at the volatile Iran / US relationship at present, this is primarily about nuclear weapons and a sense of threat from these weapons (from both sides), the ongoing conflicts in Syria and Yemen (would these conflicts have been so deadly and carried on so long if the weapons flow from abroad had been curbed?), the DPRK and US relationship, and closer to home, the terrorist attack in Christchurch. Weapons, sadly, drive a lot of our current events. Meanwhile, before anyone casts the idea of disarmament off as complete idealism, I’m not talking about abolishing all arms in every circumstance. Most disarmament advocates also believe that it is totally legitimate for a country to maintain their armed forces to a level that allows them to be secure, or that certain professions or individuals might have a legitimate need for a firearm. The difference here though is that we maintain that there are certain types of weapons that should never be in circulation, and also that the number of arms be appropriate for the need. Currently, we have a world that spends more money on arms than it does on health, education and the public good – so we think this is seriously out of kilter and we should be talking about it and asking whether all these arms are necessary, or whether perhaps they are perpetuating conflicts and global instability.

Was there a moment that solidified your motivation and passion for disarmament?

I lived in Northern Iraq (Iraqi Kurdistan) for three years after my undergraduate Degree and the experience of living in a post-conflict society and witnessing first-hand the carnage that conflict wreaks on the people, land, society, infrastructure, citizenship and democratic processes, was powerful. I came to see the true cost of conflict, that carries on for decades, if not indefinitely, after conflict. I became convinced that avoiding violent conflict and instead resolving differences through negotiation, dialogue and other peaceful means was critical. And I also began to realise that if the weapons are available, a violent conflict is far more likely. One of the most powerful ways to prevent violent conflict is to restrict or abolish particular weapons, reduce arms numbers overall and change the narrative into one that is open to dialogue and negotiation.

We see and hear about disarmament issues regularly in media, whether it be from nuclear threats to gun control in communities. As well as this, there are plenty of misconceptions and one sided narratives about war and violence. What advice do you have to young people who wish to view weapons news in media critically?

Like everything online, I would suggest choosing your news sources wisely and only read media (and especially social media) that is from credible sources, there is an incredible amount of very slanted and / or bogus news out there. I tend to get my news from sources such as Radio New Zealand, the Guardian and The New York Times. For disarmament related issues, I go to the experts on these topics such as Reaching Critical Will, SIPRI and UN Institute for Disarmament Research (UNIDIR). Many media sources love a good shock headline, and particular countries and groups are all too often constructed as a threat – such as North Korea, Iran, and that is all we might hear about these countries in mainstream media. Of course, there is a whole wider context to every situation, and it’s very important to read wider than just the shock headline and also consider how and why these countries may have earned this ‘threat’ status and whether that label is fair.

Are there historical moments you always think about as pivotal to bringing disarmament to the forefront of political discourse?

Well of course, here in New Zealand, the nuclear testing that was going on in the Pacific during the second half of last century, and came to a head with the French nuclear testing in the ‘70s and ‘80s brought the issue of nuclear weapons right into the public domain here and it became an election issue in the 1980s. Jumping right forwards, in 2017, we saw the heated Twitter storm between President Trump and Kim Jong Un threatening each other that they would hit the nuclear button, which made the whole world sit up and remember the nascent danger that nuclear weapons pose. Time and time again, we see these crisis moments and they do cause a flurry of media and political attention. But it’s not enough to just respond to these crisis moments and then let it fade from consciousness when things calm down, as they’ll just re-emerge some other time in some other place. We actually need to continually pursue disarmament and work towards abolition (especially of nuclear weapons) so that these crisis moments cease to be possible.

The rhetoric that individuals and nations are entitled to weapons has come out strongly in issues of global security and even in New Zealand, do you have any words in response to those who believe that disarmament has lost its meaning?

In the context of nuclear weapons, I think you only need to look at the global instability it causes when you have some countries (for example the US) that consider it their right to have nuclear weapons – and how that is incredibly threatening to other countries, and in many cases, has led to proliferation. For example, North Korea, and now the ongoing saga with Iran. For both of these countries having such a militarily powerful foe, such as the US, who is nuclear armed, and under this particular President, not afraid to openly taunt them with it, is very threatening. These countries have seen what has happened in other less powerful countries, such as Libya and Iraq and they don’t want that to happen to them. There was a big global movement for disarmament after WW1 as many believed that this war had happened because the world was awash in weapons at this time, and I think this sentiment is as true today as it has ever been. If you have a world that spends more money on arms than it does on health, education and the public good, and you have a small number of countries that claim it is their right to possess nuclear weapons and are not afraid to openly threaten other countries with them, then you are far more likely to solve disagreements through violent conflict. So no, disarmament has far from lost its meaning, it is critical to achieving world peace today.

Do you believe that there is a unique role for New Zealand and young people in the future of disarmament?

Absolutely. New Zealand has such a long and proud history of being a disarmament advocate, our nuclear free legislation is over 30 years old now and was achieved through a groundswell of public support across the country. Internationally at global forums such as the United Nations and the Conference on Disarmament, New Zealand diplomats are well respected for being knowledgeable on the subject and true disarmament proponents. So I think for young New Zealanders today, it’s important to learn about New Zealand’s history in this area, to learn about how our nuclear free legislation came about and why Kiwis were concerned about it at the time, and then to pick this sentiment up for our own generation and keep on with this important work. There is a strong group of Kiwis out there today working in disarmament related positions across the globe, diplomats, academics, lawyers, activists and NGO professionals for example.

How can students get involved with the Disarmament and Security Centre?

We’d love students to get involved with the Disarmament and Security Centre. Firstly, they can send me an email at lucy@disarmsecure.org and I can add them to our database so they will get any updates from me about various events and opportunities such as internships, scholarships, positions on delegations to conference etc. They can head on over to our website at www.disarmsecure.org and check out all our various resources and follow our blog. They can follow us on Facebook and Twitter at DisarmSecureNZ. And they may also like to join our online network: https://disarmsecure-online.mn.co/ this is a platform for disarmament proponents in NZ where we share ideas and build community in the disarmament space.