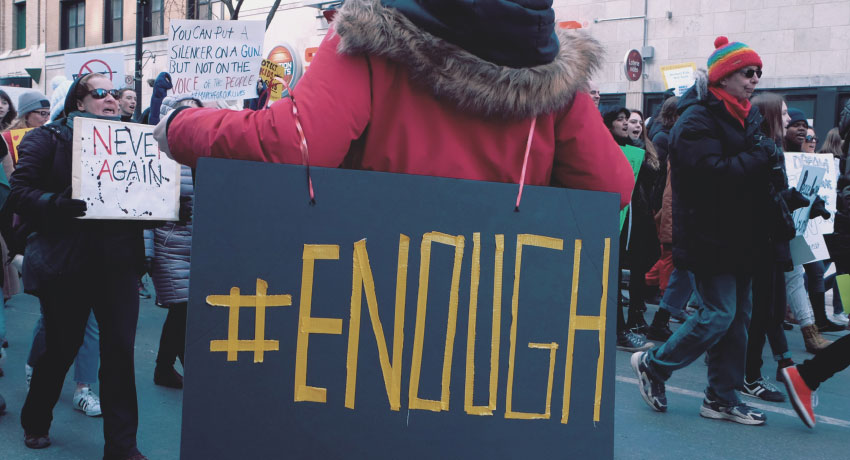 The face of a new revolution is here. And she’s only eighteen. Think Evie from V from Vendetta. Shaved hair, bloody, bold and resolute. Emma Gonzalez is quickly becoming the face of a new wave of advocacy, an unavoidable cry for Gun Control. Emma and her classmates, all survivors of a school shooting that should never have happened are rallying for change, rallying for gun control that is long overdue and an end to the reality that they’ve had to accept for too long.

The Valentine’s Day massacre at Marjory Stoneman Douglas High School in Parkland, Florida occurred when a former student, Nikolas Cruz, made true on his threats from as far back as 2016 to carry out an attack on his high school. His attack killed seventeen people and injured a further fourteen. It stands already as one of the world’s deadliest school massacres.

This is not the first time a mass shooting has occurred at a school in the United States. Columbine, Virginia Tech, Sandy Hook. Names that are familiar worldwide. Students at Stoneman Douglas are representatives of a generation that has grown up with the inevitability that they may in their lifetime be affected by a school massacre. Columbine, regarded as one of the most shocking and most prominent school shootings occurred when Emma Gonzalez was barely months old. Gun massacres have become so ingrained in the American psyche. Despite answers appearing so clearly to those worldwide, American lawmakers have still been unable to hear the cries for gun control and respond with protections and laws for their constituents.

Cameron Kasky, a Stoneman Douglas student, had enough. He wasn’t the only one. He and a group of fellow drama club students met in the four days following the attack. They discussed the national media spotlight that was currently on them and the foreseen inaction that would occur following the attack. Never Again MSD was formed; a student led organisation that advocates for tighter gun control and a resulting end to gun violence.

It only takes eleven minutes to watch Emma Gonzalez’s impassioned speech outside Boward County Courthouse. Eleven minutes that are intense. Emma is angry, she is forwards and her speech is backed by the cold facts. I strongly urge you to watch it. Never Again MSD are passionate; they have had a lifetime of school shootings, and a lifetime of ignorance by legislative bodies that are meant to protect them. The victims are stepping out. No more sorrow, no more only ‘thoughts and prayers’: they want action, they do not want to see another group of students suffer like they do. They do not want fathers, mothers, brothers and sisters to sacrifice their loved ones to a pointless cause.

Never Again MSD has traction. As a generation powered by social media and fuelled by a cause, they are incredibly powerful. Students are walking out of class and making themselves heard across the country. Oprah and Amal & George Clooney have already together donated over a million dollars to their efforts. Ellen DeGeneres has had Emma Gonzalez and Never Again MSD on her programme. Emma’s twitter account @emma4change has amassed more followers than the National Rifle Association in less than two weeks. Emma does not have a unique cause nor is she the only American to want change. She is however the spokesperson that is needed. She is only eighteen as we are too, but she is a powerful advocate, an Evie of our times. She attends a high school, just as I did, and she faces the same issues we all did as young people. But when her and her classmates were affected by a culture of inaction, an atmosphere of autocracy and a government where financial payoff has replaced genuine concern for the lives of constituents, she stood up. And they all stood up. Never Again MSD are planning a nationwide march along with a march on Washington D.C. on March 24th. It is time to watch a long overdue revolution occur, one that is about protecting those who deserve protection, fighting a corruption that is long present, and forcing a change that is necessary. And it all started in a drama club with a group of eighteen-year olds.