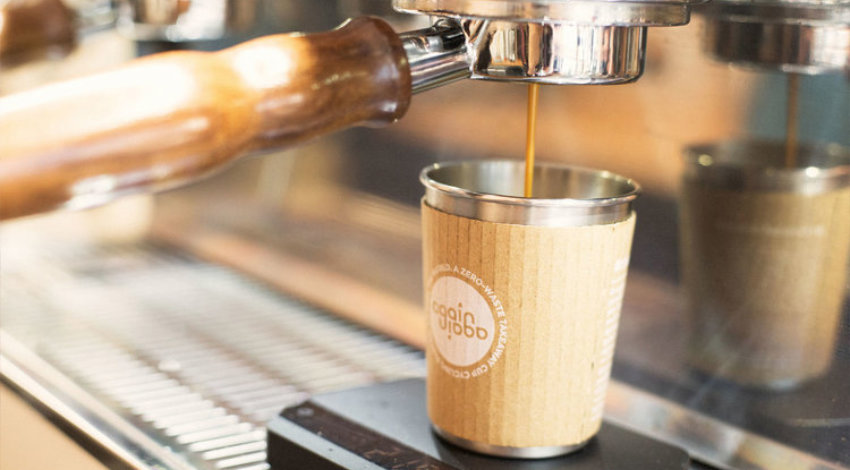 A new service for coffee drinkers has launched in Auckland which pledges to reduce the amount of waste generated by single-use takeaway cups.

Currently, New Zealand sends 295 million cups to landfill every year. It’s not a ‘keep cup’ service – in fact, it’s quite the opposite. Again Again is rolling out a fleet of re-usable steel cups available for deposit and return to participating coffee shops in the Auckland region. Among the first 30 Auckland cafes signed up include retailers in Britomart, CityWorks Depot, Ponsonby Central, Kingland, K Rd, and Wynyward Quarter. How it works is; you pay an initial $3 deposit to order coffee in an Again Again steel cup. Take it on your merry way, and next time you visit any participating coffee shop, you return the cup and claim back your deposit. If you’re a little forgetful and let cups pile up in your car, it’s okay; Again Again lets you return up to 12 cups at a time. The more retailers sign on with Again Again, the easier the service becomes.

Again Again’s founders Melissa Firth and Nada Piatek identified a problem with the current approach to sustainable takeaway cups. Biodegradable single-use cups are rarely recycled or composted properly, and keep cups are frequently forgotten and exiled to the kitchen cupboard. Many, including the founders themselves, were skeptical as to whether anyone would actually return the steel cups after use. However, their launch in Wellington earlier this year was hugely successful. One café at Wellington’s Victoria University signed on, and within first week were already up to 23% of their takeaway throughput being served in Again Again cups. Last month, long-running Aro Street bakery/cafe Arobake announced it was doing away with single-use cups altogether, offering only Again Again cups for takeaway customers.

The deposit system appears to provide a source of motivation for some – some cafes reported random members of the public returning cups they had found outside. It brings comparison with the old system of returning glass bottles for pennies. Co-founder Nadia Piatek explains: “for example, if I go to the beach to have a coffee and leave the cup on the beach, the next person who walks past might be a kid who wants some pocket money, or perhaps a homeless person, or just anyone who understands the system: there’s something in it for them to pick it up.”

If you’re worried about hygiene, don’t be. Again Agin cups are no less hygienic than ‘have here’ ceramic coffee cups, complying with strict food safety regulations. They do ask that you don’t bring your cups back filled with mould, because that’s just gross.

Both government and private businesses have been stepping up to the challenge of tackling waste in 2019. The nation-wide plastic bag ban is now in full swing, and the University of Otago has recently made the decision to stop providing disposable coffee cups on campus. Fingers crossed the University of Auckland may decide to take similar steps towards fighting climate change.

Participating retailers near UoA include: Mojo on Symonds Street, the student training café in the NSIA building on 100 Symonds St, Point of Yeild on 191 Queen St, the Food Truck Garage and Odette’s Eatery in City Works Depot, Amano, and the Store Britomart.