Feature: The Russell McVeagh Allegations are just a Drop in an Ocean of Sexist Culture 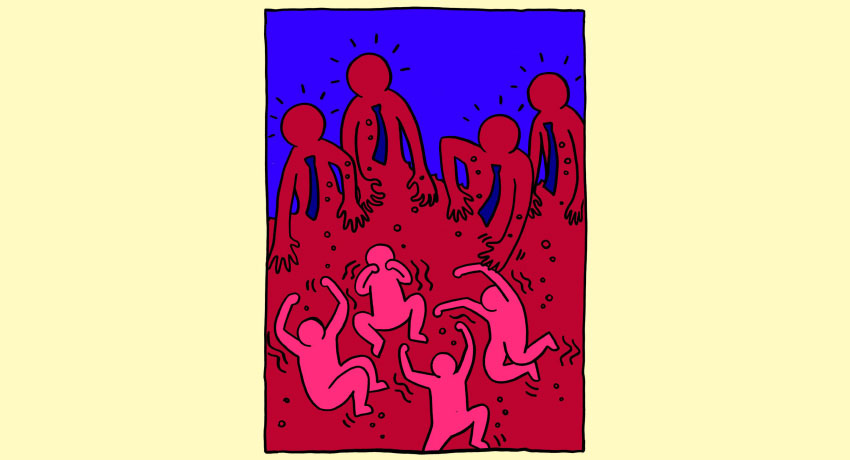 Claudia Russell unpacks the sexist culture of the legal world.

Allegations of serious sexual misconduct have been made against two senior lawyers at one of New Zealand’s most prestigious law firms, Russell McVeagh. The claims have caused the entire profession to question how their most vulnerable members of staff are treated. Dozens of female lawyers have spoken up in the aftermath, and it is clear that sexual misconduct and sexism in the legal industry extends far beyond the doors of Russell McVeagh.

The incidents in question actually occurred two years ago, when several female student interns at the Wellington firm’s summer internship program reported inappropriate sexual behaviour, including sexual assault 1. Employees blame the ‘boozy’ culture fostered to lure top students into joining the firm. Existing staff are told to show the clerks ‘a good time,’ by getting them ‘as drunk as possible’ 2. While alcohol may be a contributing factor, to characterise this as a drinking issue is narrow-minded and borders on victim-blaming. Most professionals who have commented claim that this is merely a symptom of deeper cultural issues within the industry.  The men accused have ‘since left the firm,’ but was this of their own accord? So far, nobody knows. The media has not been informed whether they will face any disciplinary measures at all. What we do know is that one of the men involved has gone on to work on a high-profile legacy project, clearly not hindered by his past actions.3

Beyond sexual harassment, several lawyers have spoken up over questionable conduct witnessed at big firms. Lecturer Khylee Quince claims that she has ‘held her tongue’ for years over a story shared to her by one concerned student, but was compelled to speak up in light of recent events:

“[She] was very upset about what had happened there. She said that after the seminar, the solicitors and students proceeded to drink the firm’s bar dry and things got out of control – culminating in a number of staff having sex on the boardroom table with several students – in front of other students.”4

Because the events were deemed consensual, Quince decided not to go to police. Additionally, one male former lawyer claims that bio-booklets of prospective summer clerks were referred to as the “summer menu” by male lawyers5. While not against the law, this type of conduct seems incompatible with an equal and respectful workplace.

Why have the allegations taken so long to surface?

It is imperative that firms respond to these revelations in a productive way. There is a positive obligation on all employers to actively prevent sexual harassment under the Human Right Act 1993. Measures like Russell McVeagh’s ‘zero-tolerance policy’ show a genuine intention to prevent workplace harassment, but are meaningless if perpetrators face no real repercussions.

No one should have to feel ostracized for reporting harassment, and yet countless stories tell us that women in particular risk losing their jobs from doing so. Employment lawyer Stephanie Dyhrberg states that in her experience, it will always be the victim of such treatment that leaves the firm 6 . Young legal interns at top-tier forms are in a uniquely vulnerable position. These placements are extremely competitive, with firms considering only a handful of the highest-achieving students from each university. Therefore entrance into summer internships are built on a lifetime of hard work. Once they get there, an intern is the least powerful person in the room, in an industry built on reputation. Dyherberg explains that while an older partner might not think twice before inviting a younger colleague to dinner, he effectively holds the intern’s career in his hands with an offer she can’t afford to refuse.

Who is to blame?

I want to be clear that no individual firm is to blame. Dyhrberg claims that ‘every female lawyer has a story’ of sexual harassment in the workplace. 7 Yet it would be presumptuous to claim that corporate law doesn’t care about gender equality. Large firms across the world have made a concentrated effort to commit to diversity and inclusion over the last few decades. In fact, Russell McVeagh was shortlisted as a finalist in the YWCA Equal Pay Awards in October of 2016, and earned a Rainbow Tick certification in June of 2016, thus “ensuring a safe and welcoming workplace for employees of diverse gender identity and sexual orientation” 8. Nearly every major firm in New Zealand has demonstrated a commitment to formal gender equality, and opportunities for women in law continue to increase every year.

What it comes down to is culture. Culture is difficult to be aware of and even more difficult to change. The Western legal system as we know it has existed since the Middle Ages, yet women were not permitted to practice until the late 19th century9 . As a result, law is traditionally a “boys’ club”, built on conventionally male characteristics of aggression and competitiveness. The same aggression from women is often looked down upon because it is inconsistent with traditional female stereotypes, but paradoxically it is still required to get ahead in the profession 10 . In New Zealand female law graduates have outnumbered their male counterparts since the 1990s, but they still struggle to attain prestigious roles. In fact, only a quarter of New Zealand’s legal partners are women, and less than a third sit on the judiciary 11. The glass ceiling is well and truly in place in the legal industry, fostered by implicit bias and stereotypes leftover from past generations. It is important to realise that in the workplace, a relationship between a glass ceiling and sexual harassment is symbiotic. Of course, this doesn’t entirely lift the blame off individuals. Culture is made and maintained by individuals, and in this case it is those individuals who abuse their status over young interns, hire ‘exclusively blonde, good looking female clerks,’ 12 and use company money to go to strip shows 13. The fact that young interns have been the ones to report this behaviour indicates that experienced and respected legal professionals may be turning a blind eye to sexist behaviour around them.

Holding on to hope

So far, no charges have been made by police, and victims are reluctant to press them. 14  Realistically, you can’t blame them for not wanting to take legal action. These are men whose knowledge and influence of the law protects them from its consequences. 15 Injunctions, defamation claims, and non-disclosure agreements are child’s play for experienced commercial lawyers.

When harmful power structures are exposed within an industry, it can make the whole profession seem grim and unfriendly. The allegations following the Harvey Weinstein claims, in my opinion, made Hollywood look like a sexist, perverted wasteland. However, there is one big positive which has grown out of the #MeToo movement and related events. Women are now being empowered and encouraged to speak up about sexual harassment, and are less likely to lose their jobs as a result. While it is saddening that the New Zealand claims took over two years to surface, the massive volume of media attention shows that society will not sweep this under the rug anymore. Calls for a sexual harassment officer within the legal profession indicate a positive shift in an industry which has traditionally favoured reputation over transparency. 16 More importantly, perpetrators are slowly beginning to feel the career-ending consequences of their actions. The more these individuals are forced to face the consequences of their actions, the less likely it is that vulnerable people will suffer in the first place