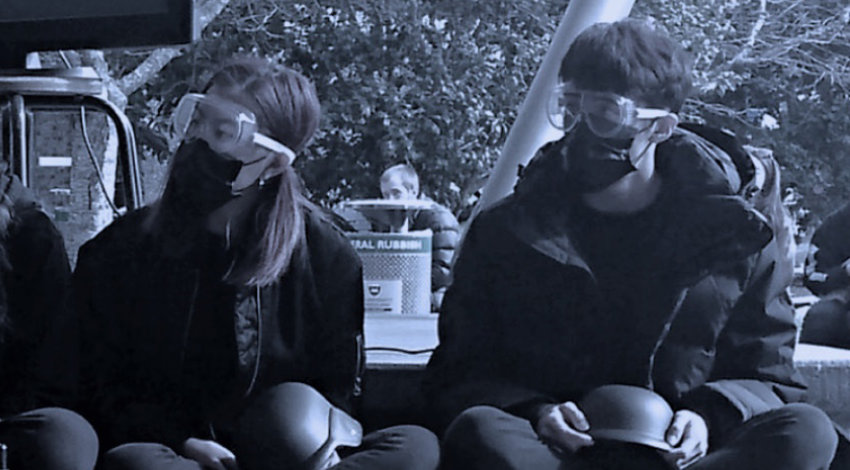 In the latest slew of student activism, last Tuesday saw We Are Hong Kongers held a protest rally in the UOA quad. The student-led anti-extradition bill protest is one of many around the world, showing its solidarity with the citizens of Hong Kong.

The crowded quad gathered around event organizers as they explained the history of events that has led to a global movement of backlash. Demonstrators at their sides covered their faces with masks and protective glasses, like the many protesters in Hong Kong. While it is symbolic of the protesters having to protect themselves from tear gas and rubber bullets from the police, it also had a very real purpose on the university campus. Many protesters fear for their safety and try and hide their identity.

“I have a Grandfather that is in mainland China. I worry that if I protest here and my face is shown in the media, I will have a hard time making it through customs, and my grandfather who is very old will be forced to go to Hong Kong to see me,” said one protester.

Another protester alleged that they had already been identified, with their name and number shared on social media, “I have received calls from international numbers harassing me. Here there is no point in covering my face because they already know who I am.”

The civil unrest in Hong Kong has been gaining traction globally in the last few weeks as both sides have become outspoken on how much influence China’s government should have on the independent nation that has officially been Chinese territory for over 20 years.

University of Auckland has been a particular hot point as a well-publicized clash occurred between the two sides the week prior to the event. Though the rally was peaceful despite one outburst between a pro-China and a pro-Hong Kong protester, tensions are clearly still on campus as later that evening the Lennon Wall that had been relocated to Kate Edgar for safekeeping had been destroyed.

The protest is based around a bill introduced to parliament in Hong Kong that would allow suspected criminals to be extradited to mainland China for prosecution. China, unlike Hong Kong, is under a dictatorship and has a stricter legal system than a democratic system affords. The Chinese criminal conviction rate is 99.9%. Many fear that the bill gives China the power to extradite those they deem as anti-China, and suppress the freedom of speech that Hong Kongers have enjoyed for the last 150 years.

One protester said that China’s growing influence in Hong Kong is why they left, “I saw how the liberty was eroded. They are supposed to remain separate,” making reference to the agreement reached in 1984, that though the country was considered part of China, it was allowed to operate differently to the mainland thus retaining their freedoms. “China puts people away for thinking …. Hong Kong people have Facebook and say what they want.”

One of the event organizers, Serena Lee was pleased with the support they got from the university community “The turnout was better than expected. The promotion was last minute.” The rally was clearly pro-democracy, but organizers insist that it was an open discussion that all viewpoints were welcome to, “We have tried our best to make it more neutral. We don’t screen anyone before they speak. Everyone has an equal chance of speaking,” pointing to the open forum in the latter half of the event.

“We wanted a platform for students to express themselves whether they are opposing or supporting. We wanted to raise awareness on campus”.

Lee said she would support a similar event held by pro-China groups, provided it was an open discussion that everyone could participate in “We do want to hear from them what their thoughts are.”