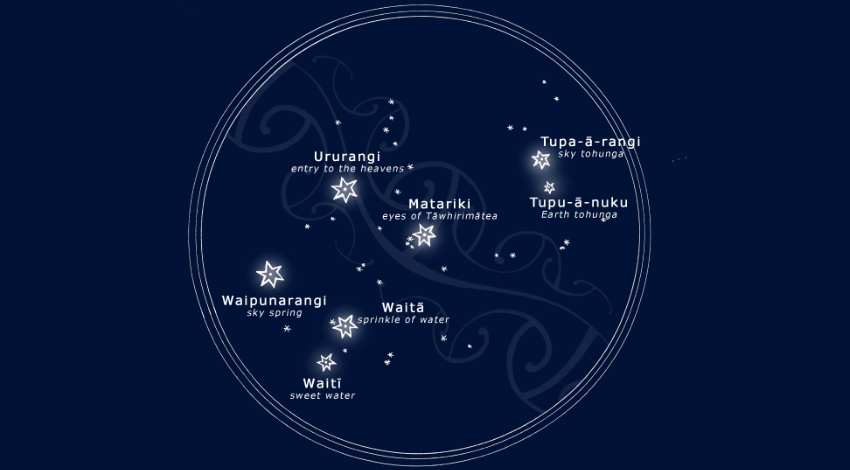 Matariki is the Māori name for the group of seven stars that appear every year that signals the coming of the Māori New Year. Some iwi however do use Puanga – or Rigel, in the constellation Orion – as a signal for the new year. This rising occurs at a similar time. In European culture, the Matariki star cluster is known as the Pleiades cluster. Matariki literally means the ‘eyes of god’ – mata ariki – or ‘little eyes’ – mata riki -.

According to some mythology, when Ranginui, the sky father, and Papatūānuku, the earth mother, were separated by their children, god of the winds Tāwhirimātea became furious and he tore his eyes out and threw them into the heavens.

One account explains that Matariki and her daughters appear to assist the sun, Te Rā whose winter journey from the north has left him weakened.

What does Matariki mean?

The Matariki cluster was used by voyaging waka to help guide them across the pacific.  Tohunga Kōkōrangi used the stars to help navigate these waka.

The rising of Matariki in the beginning of winter signals a new year. Traditionally it has been a time to remember the dead: with a new year passed, people may mourn those who have died since Matariki’s last appearance.

Matariki, however, is also a joyous time – one in which to celebrate the end of the crop harvest. Harvested crops were stored for the winter and the land would not produce for several months. Seafood was often harvested due to fish migration providing plentiful supply. Birds were also hunted. Kererū grew fat from feasting on berries and were often snared and preserved in fat during Matariki.This practice gave rise to the proverb: Ka kitea a Matariki, ka maoka te hinu’ – when matariki is seen, the fat is cooked

Matariki celebrations often included singing, dancing and feasting. It is a time to come together with whānau.

Although Matariki celebrations dwindled in colonial times, in modern history, it has been revived and celebrated. Modern matariki celebrations include festivities and the flying of traditional Māori kites – Pākau -. Events are held across the country for people to come together and commemorate the Māori New Year.

In 2019, Matariki begins on June 25th. Go to matarikifestival.org.nz for details.