Ihumātao: A War Without End 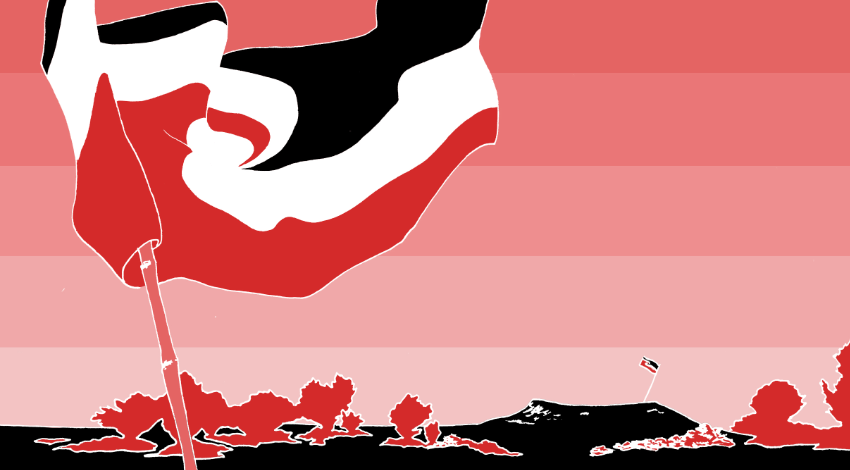 You’d be excused for thinking that the industrial area by the side of Auckland’s State Highway 20A contained little more than warehouses. But if you follow the coastal line far enough south-west, you’ll begin to see coastal farmland, built upon fertile volcanic soil that nourished the first arrival of Maori people to Aotearoa after the great migration. “When people hear Ihumaˉtao, they don’t even think it’s in Auckland”. I certainly didn’t. But the fact is this piece of land is situated in Mangere – at the heart of Auckland – a 23-minute drive from the Sky Tower and a 13-minute bus ride from Manukau. If you catch the train towards Manukau, you might even pass Ōrākei, the site of the infamous Invasion of Bastion Point on May 1978 by 600 police officers and members of the armed forces leading to the arrest of 222 protestors. A disheartening sight as people ride on towards Ihumātao to fight the same battles they did 41 years ago.

A brief history of Ihumātao

Circa 12th century: Waka that carried the ancestors of New Zealand’s indigenous Maori arrive in New Zealand. During the early 19th century, the land at Ihumātao, farmed by Maori, would nourish and feed the growing population of colonial Auckland.

1863: The land at Ihumātao was seized by the crown “by proclamation” thus breaching the 1840 Treaty of Waitangi agreement. This was done because the iwi and the people of Ihumātao would not pledge their allegiance to the crown.

January 30th, 1865: Proclamations under the act were issued for the seizure of the East Wairoa and West Pukekohe blocks for settlement and colonisation, followed by the Central Waikato district and the Mangere, Pukaki, Ihumata and Kerikeri blocks on May 16th 1865. As occupants were evicted from their land, their belongings were looted by colonial forces and neighbouring settlers.  Houses were ransacked, cattle were seized, and their horses were transported for sale in Auckland.

1869: The land at Ihumātao was sold to European farmers, Gavin Wallace and the Wallace family, whose descendants have privately owned the area since. Once the Maori returned after the Waikato wars, the land they had tended to for 800 years was now in Pākehā hands.

The volcanic cone of Ōtuataua, site of the first pā (village) on the southern side of the stone fields, is an ancestral maunga (mountain) viewed by the iwi as both a defining landmark and the physical embodiment of their connection to the land. In the 1950s, it was quarried until nothing but a hole remained. The same fate befell Maungataketake to the west.

1960: The Manukau Harbour, where the people of Ihumātao got their fish and kai, was closed by the Auckland drainage board to build oxidation ponds for the cities new wastewater-management system. Sewage was pumped through the Manukau basin, which meant the closing of the iwis ancestral river, Ōruarangi.

1990s: Efforts were made to rejuvenate the waters surrounding Ihumātao that saw results but in 2013, freight company Jenners Worldwide spilt more than 1000 litres of methyl violet industrial dye into the stormwater system. It turned the creek purple and killed the life within it.

2008: An encroachment to the south side of the airport was approved despite protests from iwi that there were urupā (burial sites) on the land. Earthworks in 2008 unearthed about 90 kōiwi, skeletal remains of their ancestors.

This became too much for the Mana Whenua residing in Ihumātao. “I will die for this land,” says Pania Newton. one of six cousins who formed the SOUL campaign (Save our unique landscape) The protectors say “The real Mana Whenua are here! 95% of real Mana Whenua are out here doing the real Mahi!”. The disagreement stems from a divide in the iwi who are split in their approach to the development of the land. Te Wharena Taua, a spokesperson for Te Kawerau a Maki Iwi Authority, shifted his focus from opposing urban development on Ihumātao land once he learned that the area was selected as a Special Housing Area (SHA). Those at Ihumātao believe these to be of selfish intentions as more than a quarter of the 480 houses being built will be given away. Fletchers have not decided who this land will be given to, but those protesting see this quarter of returned land as “not good enough!” Pania and the SOUL movement were angered when they learned they had immediately agreed to terms instead of fighting for more than just 25% of the land they once held.

National MP Judith Collins said it was a “private dispute” as the land has been “privately-owned” for 150 years, and backed the “Mana Whenua’s decision to sell. She maintains no sympathy for those arrested on the site and refers to those protesting as “excited white kids”. Speaking with those protecting the land from Fletcher, it is evident that the crowd is one of the most diverse gatherings anyone can witness, including Maori elders and their tamariki, from Joe Hawke, a former Labour MP who also led the Bastion Point protests, to Green Party MP Chlöe Swarbrick. Those on the other side of SOUL’s campaign? Don Brash probably. David Seymour made his thoughts public: “The protestors need to leave the site and let Fletcher Building exercise their property rights” and “This is why we can’t have nice things”. Surprisingly, or perhaps not, Jacinda Ardern said that the government would not intervene.

Remarkably, Ardern and Seymour share the same stance when it comes to who they initially sided with. Both initially sided with the “local iwi” who support the housing development. But the fact is that only one iwi rūnanga (Te Kawerau a Maki Iwi Authority) supported the housing development. But the crown’s own Treaty settlement legislation acknowledges at least three iwi that whakapapa back to Ihumātao. Apparently, these are not “the local iwi”. “The Mana Whenua are not the ones protesting,” says Ardern. But the fact is that they ARE the Mana Whenua, just not the Mana Whenua who agreed to have their land built on. Since then, Jacinda has stated the government would halt housing development until a mutual resolution can be reached.

Few are denying that the confiscation of this land in 1863 was justified or right in any way, but the language used to describe the situation at Ihumātao becomes increasingly dismissive of what SOUL is fighting for. “Privately owned” is a loaded definition that dismisses and ignores the immoral seizure of land. It hides someone’s bias behind legal definitions and ignores every bit of history before the area became “privately owned”.

There has been much criticism with people saying this is not another Bastion Point and that “they were very much different situations”. The main difference being that the land at Bastion Point was confiscated by the New Zealand government for public works (health and safety, employment, and recreational infrastructure) while Ihumātao was seized and sold into “private ownership”.

Where we are today

On the night of July 25th, 2019, after waiata and kai of all cultures, a modest man approaches the front line of a police barricade at Ihumātao with the eyes of Mana Whenua slowing taking notice to his presence. The crowd slowly begins to hush, and the man starts to speak.

“Whanau I have come here today to share some of my thoughts on this issue.”

“I’ve seen what this has done to our people.”

“This is what colonisation does to our people.”

It is evident that the situation at Ihumātao speaks to more than just Maori land rights issues but the effects of colonisation on indigenous people all over the world. “Why do Maori, who make up 15% of New Zealand’s population, also make up 50% of our prison population? Are we just messed up? Or is there a reason, whanau? This is what colonisation does to our people,” the man says. Undoubtedly, despite the efforts of many that try and tell you otherwise, the issue resides in the environments Maori and PI are raised in and the after-effects of colonisation on Maori that are still felt today. In present-day Aotearoa, it is not uncommon to hear the “pick yourself up by your bootstraps”. Notions of Maori being where they are today because of their characteristics are still prevalent in the mentalities of many New Zealanders. Unfortunately, people don’t see classism and colonisation as legitimate forms of violence because they still believe being poor is indicative of a person’s character rather than being because of the effects of systematic oppression.

The unassuming yet powerful man who spoke touched all the themes of the day better than anybody else. He was full with the symbolism of Mana Whenua, and the cadence of a modern Māori leader. He was both militant and sad, and he sent the crowd away feeling that the long journey had been worthwhile.

Fires burn at night with the flags of every Pacific nation planted into the ground in solidarity with Pania and her Whanau. For it is not only the land at Ihumātao that these people are fighting for. Mauna Kea, a mountain on the island of Hawaii, has become subject to the same development issues as Ihumātao, and when measured from its oceanic base, Mauna Kea becomes the tallest mountain in the world. The peaks of the island of Hawaii are sacred in Hawaiian mythology.

If you have the chance to visit, Ihumātao transports you into a different decade. A glimpse into the possible future of Pacific unity. Speaking with people there, it is evident they are not here in self-interest but in support. “All Pacific Islanders have a home outside NZ, but for Maori this is it. This is their fanua, their whenua.” All sorts of magic are happening at Ihumātao. Rival gangs arrive and share the same space in solidarity against the events and conditions that placed them there in the first place. “I fucking hate Destiny church but if you come here to tautoko (support) then ka pai,” the young protectors say as they chuckle.

Go there. Go place your feet on the land. Go cast your eyes on the Maunga and Moana. Go drive through into this peaceful secluded, unspoilt, green oasis on the fringes of Tamaki Makaurau. Go listen to the pleas, the laughter, the waiata, the anguish of rangatahi and tamariki, of pakeke and kaumatua of Te Akitai Waiohua, Te Ahiwaru, Ngati Rori, Ngati Mahuta, Ngati Naho and others who can trace direct descent to families who have occupied the land for 800 years or more, as you decide if the theft of our culture is worth .5 of a GPA consideration. As you decide if a quarter of this small piece of land and 40 houses is a good enough of a deal to settle for. There can never really be justice on stolen land.