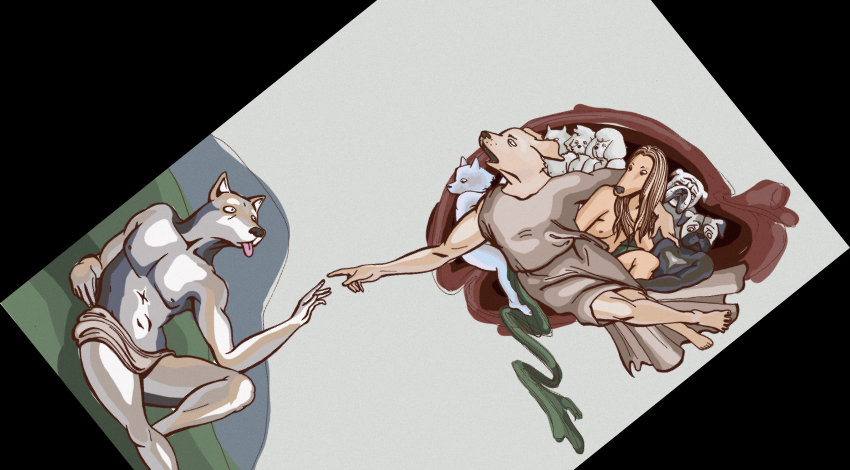 As anyone born in the mid-nineties to early 00s will remember, Nintendo’s DS was considered the epitome of cool. The best game on the market – definitely Nintendogs. Whilst many DS’s are now lost, broken or hidden away, Bailley and I were incredibly lucky to remember where we placed our relics and so decided that after seven (ish) long years of neglect, it was time to pull out the old gem and see how our nintendogs were doing.

Nintendogs was the shit. It came in three versions: Dachshund & Friends, Labrador & Friends and Chihuahua & Friends (and then later the version Dalmatian & Friends was added). Your little virtual pet enjoys walking, bathing and eating and you can enter it in competition to do tricks. When you wanted another, you added a pal until you had three and had to place one in the dog hotel.

Cameron: First thought – my dogs are called Sheila, Dylan, and Anika! (Exclamation point included). They seem healthy and excited to see me, not sure why they’re not dead. You know when you leave them for 3 days they get hungry, but you leave them for a year and they’re fine.

Bailley: Nintendogs must not have a built-in starvation mechanism I guess

Cameron: I’m patting the dog’s head and it goes all cuddly. Oh, it wants me to rub its butt. Looking in my inventory, I found many items including a bubble-blower, a pair of business glasses and a keyboard that the dogs yap along to. You can give them toys to take away from them, which is very much the Sim pool-ladder situation

Bailley: I’ve blown the DS more than any man in my life trying to get this cartridge to work. If you blow it enough you get the results you want. I want to see my precious doggos!!

Cameron: So, I have Labrador and Friends and so I have these breeds: Labrador, Golden Retriever, Pug, Miniature Pinscher, Toy Poodle, Mini Schnauzer, Boxer, Corgi, German Shepherd, Shiba Inu, Dalmatian

Bailley: Is that because you had no friends to get breeds from?

Cameron: I have three friends according to my profile actually

Cameron: Apparently my username is ϑCamRoxϑ . I think that name proves I was a homo from early on – it’s those smiley faces.

Bailley: Does it alternate capitals? That’s the difference between knowing you’re gay and not knowing.

Cameron: No alternate capitals no. Me and this dog have spent only twelve minutes together apparently.

Bailley: That’s so sad – twelve minutes in so many years. Madeleine McCann’s parents spent more time with her.

Cameron: Dylan has only eaten dog biscuits and we’ve spent 28 mins together. Me and Sheila spent 48 minutes together. She keeps asking for attention.

Lachlan: You realise what you did is give consciousness to these dogs about a decade ago and then immediately abandon them

Cameron: Yes, I’m a terrible person definitely. Apparently I can’t take Dylan for a walk because he needs to rest.

Bailley: My dog’s wearing a little Viking Hat! I should note that I love that I’m roasting you for your dogs and I’m over here with 7 minutes.

Cameron: I would like to point out my biography reads ‘Bark Bark’. I apparently live in the very chic ‘Urban Living’ theme – how Boujee.

Bailley: Wanna see how much of an edgelord I was? My bio reads ‘every book has a fragrance’. I was a Tumblr kid before my time.

Bailley: This is so worth not going to class. No I don’t want a singular biscuit

Cameron (Feeding the dog a biscuit): Eat. Eat it bitch.

Bailley:  Why did I name my dog Blight?. I’ve also got North – so clearly I was ahead of Kim K

Cameron: Oh shit I forgot about the dog hotel, I’ve got two dogs there, Gordon and Sarah. Sorry I mean ↔Sarah↔

Bailley: Look at this little BITCH dog. I want a fucking beagle.

Cameron: Is there something fucked up about putting a dog in a hotel for months?

Cameron: Far less fucked up than leaving then for 7 years really

Bailley: I’ve spent more than an hour with North. I’ve spent 8 minutes with my other dog. Clearly North is my favourite. Think I just wanted that one, and the rest of them we’re just like ‘oh look a dog’.

At this point, we decided to use the wireless to make our dogs meet.

Cameron: Did you name the dog se-s-secoora?

Bailley: Sakura. I was really into Cardcaptors ok.

Cameron: Aw, when I pat the dog it sparkles, so cute.

Bailey: Me when I get attention

Cameron: Over while my dogs seem happy. They were quenched. Think I’m gonna leave them like that. Happy and Quenched

Bailley: And ready to be ignored for another seven years. Well I’m excited we can now use pictochat to shit-talk everyone else in the office.

Cameron: Like we can’t already do that on messenger?

Bailley: But now we can also draw dicks.