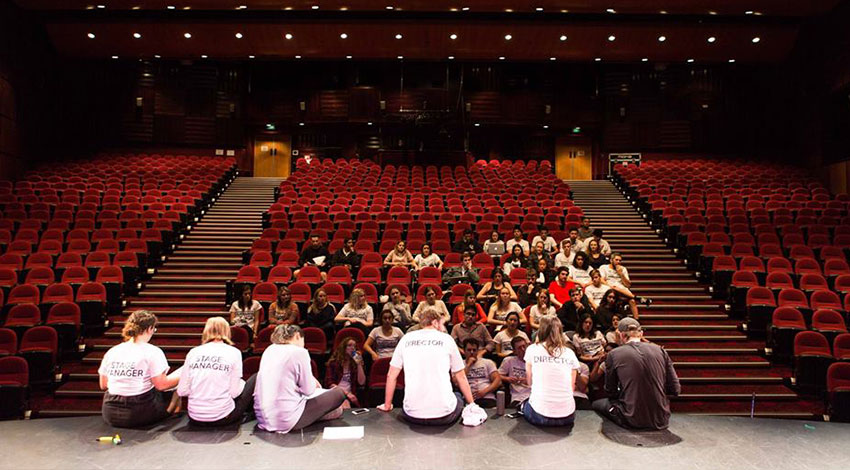 Every August, around 250 student performers, and nearly 6,000 audience members, make the difficult and dangerous (well, mildly steepish) trek up to Hobson Street for a month of Revues.

A Revue, if you’ve never been to one before, is somewhere between a parodic variety show and a serious stage performance; usually combining dance, music, comedic sketches, and a slightly stolen plotline. Auckland University is home to three Revues, put on by students from the Med, Law and Engineering faculties respectively. Legend has it there was also a Pharmacy Revue at some point; but nobody quite seems to know what happened to it.

Each Revue has its own flavour, reflecting the particular student body it has grown out of.

The Med Revue have a reputation for particularly impressive music and dance numbers – last year’s show was a parody of the award-winning musical, Phantom of the Opera(ting Theatre). This year continues that trend, with Circle of Knife, loosely based on the Lion King.  They also have a reputation for slightly less impressive, but no less entertaining, body part puns.

The Law Revue is known for their politically-minded humour, as befits their faculty. Their music video parodying Robin Thicke’s Blurred Lines made national news a few years back, as did last year’s critique of Auckland’s transport woes, set to the tune of Lorde’s Green Light.

The Engineering Revue is the largest of the three, with over 110 cast members and crew, and looks exactly like what you’d expect a bunch of Engineers to come up with in their spare time:  sets and props that are far more technically cool than was strictly necessary, and dance costumes that light up in time to music; because hey, why not?

Despite the longstanding tradition of cheerily insulting each other’s faculties onstage, behind the scenes all three Revues have a close working relationship. Thousands of hours of planning, writing, choreographing and rehearsing go into putting on a Revue; and sharing notes and theatre negotiations between faculties goes a long way toward easing that burden.

Some of the cast members have come from performance backgrounds; others are on stage for the very first time. Either way, everyone is there for a few very simple reasons:  to have fun, to do something different from their ordinary studies, and, at the end of it all, to become fast friends with a whole bunch of people from different corners of their degree, who they might otherwise never have met.

University is, in many ways, a strange chapter of life:  everyone around you is learning how to be an adult, and starting to figure themselves out properly for the first time. Moreover, for many people, the university experience risks being very stressful, and potentially quite lonely, particularly in some of the more competitive degree programmes.  Revues can be an antidote to that chaos. Like a first-year hall, a Revue provides the opportunity for a group of people to spend a large amount of quality time together, working towards a common goal, outside of study or work. This kind of opportunity – which gets harder and harder to come by the older we get – provides all the right conditions for a tight community to form; a community that can relieve the pressure of, and add diversity and joy to, the university experience.

At the simplest level, being part of the Revue community gives you direct relationships with others who have been through your degree before you:  people who can provide advice, and assignment help, and a reassurance that everyone does get through it in the end. More than that, it gives you a chance to appreciate how many dimensions there are to your peers, to see the depth and breadth of passions and talents that they have, passions which never get the chance to surface during ordinary coursework. And, at the end of the day, it does what all communities do:  brings you together with people who are going through the same things – people you can talk to, to share the burdens, share the joys, and share the pride in the thing you’ve created together.

Ultimately, Revues are a whole lot of fun:  to plan, to perform, and most of all, to watch. They’re funny, relevant, and genuinely great pieces of theatre, in a uniquely studenty way. If you get a chance next year, consider joining the Revue community yourself. Until then though, support your peers and come along to watch one (or, if you’re a really keen bean, why not all three?). We’d love to see you there!