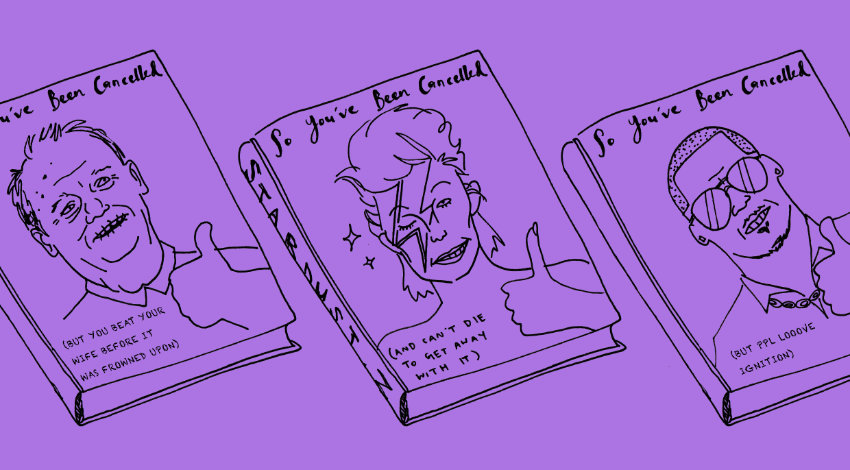 Much is made of so-called ‘cancel culture’ lately, from Twitter threads about the actions of celebrities past and present, to illegible and laughably paywalled NZ Herald ‘think pieces’, to Serious Academic Discussions. For the uninitiated, ‘cancel culture’ is considered the evolution of public callouts: rather than simply list one’s transgressions, the focus is on not giving them airtime, public presence, etc.. In short, snuffing out the candle that burns brightly. An example many would probably be aware of are the responses to Kevin Hart and his long-term homophobia.

I’ll provide some context as to what ‘cancel culture’ means to many people. It is considered an insidious way to suppress free speech. It’s seen as very negative, calculated and omnipresent, that the Big Bad Left is just looking for cows to lead to the slaughter. ‘Cancelling’ is considered the epitome of the social media witch hunt, just another cycle of the need to censor, much like the response to ‘political correctness’ that we’ve had to hear Paul Holmes and Mark Richardson and Mike Hosking bang on about for the last 25 years. Overall, it is a very reactionary term, most often adopted by right wingers and enlightened centrists, but finds usage all across the political spectrum. It’s the rejection of what they label ‘commies and men-dressed-as-women and uppity [insert indigenous folk here]’, and while it is totally understandable if you’ve never heard of any of this, it’s a discussion that is happening across all media in one way or another.

The ‘cancel culture’ boogeyman is a story that perpetual self-victimisers of any political persuasion, but more often the increasingly reactionary global right wing, tell themselves to justify their actions. Once the concepts of social justice, previously isolated to academia, became easily accessible to millennials and 30-somethings through internet access around 2012-2013, there was a concerted effort to not tolerate the bigots that previous generations waved off as just being ‘complicated’, if they waved it off at all. This was a cultural change that did happen, as heightened awareness of what an increasingly history-literate youth would not tolerate has forced media giants to rethink their plans, or be smarter in their wider intolerance. Diversity as a way to placate would-be activists being a common example. #MeToo was a slow-burn aftereffect from different, though not unrelated, feminist discussions that had been happening at the same time. In general, the culture of tolerance was changing. I’ll give Duncan Garner that.

But here’s the thing – cancel culture, as the boogeyman that is out to deplatform and demonetise you, just doesn’t exist. Or rather, it doesn’t exist with either the power, intent,  or resources behind it that the ‘just telling it like it is’ folk believe it does. Or are paid to say it does. There are absolutely people set out to make sure abusers and bigots don’t prosper, through awareness campaigns or other methods. They’re called decent human beings that believe in consequences for actions not befitting a just society. ‘Cancelling’ is an action that certainly exists, or at least, tries to exist. More on that soon. But the ‘culture’ aspect in ‘cancel culture’ is, to quote Jonathan Frakes, ‘just pure fiction. We made it up. That was one of our lies.’

Think for a moment about what it means to be ‘cancelled’. Does that person disappear into the Left’s MaximumUltraPrison, run by Stasi officers with blue hair and blue checkmarks next to their names? Does that person lose their source of income relative to the field they were bigoted in? Do they disappear from the public sphere, never to make another televised appearance? Are they ‘cancelled’?

No, they’re not. If anything, being ‘cancelled’ is good for you. That’s the ultimate joke of the matter – making a show out of apparently being tarred and feathered is, with few exceptions, very good for your career prospects, even if you sometimes have to adjust your expectations of who your audience will be. There are some reasons for this. Firstly, and this is a sincere criticism of the left as much as anyone else,‘cancelling’ is typically poorly executed – rather than actually ignoring & therefore snuffing out the oxygen that allows the person to get attention for their bigotry, there is such a strong need to dunk on the person that they are given endless exposure, allowing them to become public figures that Twitter and YouTube, soulless to the bone, eagerly monetise. I get it, I really get that need. But repeatedly going back to the person only makes them stronger – it’s a tired joke by now, but the Netflix stand-up comic category is proof enough of this.

Secondly, this introduces these people to whole new audiences: the self-victimised right-winger, and the Very Upset Centrist. People that earnestly believe in their very existence being threatened by the Uprising of the Left, or look at fiery disagreements with racism and racism itself and say ‘these are the same’. These public figures, ranging from Jordan Peterson to Roseanne Barr, Candace Owens to Kevin Hart, become highly effective at grifting these people, raking in the $$$ by telling them what they want to hear. Overall, they get a new audience, one that is effectively outside the reach of earnest criticism, because they will never engage with the reasons why some people might have considered John Q. Media Figure to be a little bit fucked up in his beliefs. A steady source of income for as long as they want.

Thirdly, if there was such a ‘cultural’ force behind cancelling, it would be far more effective than it is. David Bowie would likely be the subject of far less tattoos on the human body if people actually cared about his predilections towards statutory rape, for example. The guy’s a rapist! Made absolute bangers, but a rapist! R. Kelly is only just going to prison for multiple rape charges, and he married Aaliyah when she was 15! The entire Jenner-Kardashian Klan wouldn’t have a shred of their media empire if ‘cancelling’ was such an effective force, Bill Murray and Gary Oldman would have their domestic violence allegations next to their faces each time they were lauded for their performances, and Azealia Banks would have been locked in the Phantom Zone by 2014! As for the shadowy threat of ‘cancelling’, if the mere allegation of impropriety was enough to end careers in the way that scared YouTube celebs say it does, the MUA and #gamer communities on that platform would have maybe four or five representatives left.

Literally everyone in Hollywood works with Woody Allen! Bryan Singer won an Oscar by extension seven months ago.

In a time where there are fewer and fewer media outlets to flock to, owned by the same people and with the same goals in mind, increasingly savvy to the ways in which they can monetise outrage and socially minded takedowns, there is more room than ever for the cancelled to, in effect, un-cancel themselves. O.J. Simpson is one viral tweet away from getting that blue checkmark, and Quentin Tarantino has vats of fanboy cum stored in his honour on the Paramount lot on a daily basis. If cancel culture is real, then as Mo’Nique said, I would like to see it.