My Brother, My Brother and Me but also Me 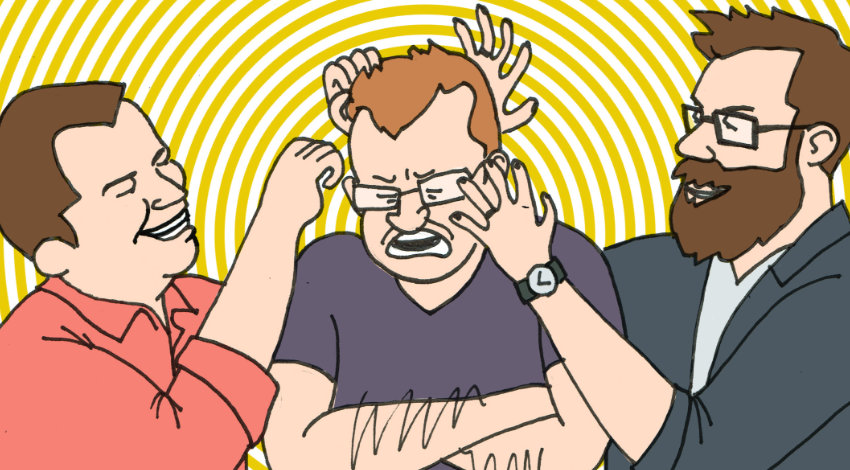 Like anyone who had been browsing the wasteland of the internet since the age of 12, I was naturally cautious of the McElroy brothers (Justin, Travis and Griffin) when I first heard of them about four years ago. I had been burned too many times before – back before the concept of Internet Nice Guy™ became widely discussed, it seemed that nearly every guy who made their public persona the Nice Guy, the Caring Guy, the Sensitive Nerd and so on, suffered a public rejection of that persona once it had been revealed that they were either a virulent misogynist, or a racist, even a sex offender.

Especially once young people started relating more to old concepts like Social Justice and weren’t as easily suckered in by such personas – each week, it seemed like the crisis of geekdom was that once again, one of their own had been parlaying that soft boy perception into massive creepdom. So when I first started paying earnest attention to the McElroy brothers, first through their massively successful Monster Factory on Youtube and then through their equally successful – if dismissed by Gamers™ – gaming website Polygon, I had reason to be cautious.

However, I decided to be optimistic. After constant soft-pressure from my circle of friends, I gave their original source of fame a go, the faux-but-sometimes-real advice podcast My Brother, My Brother and Me. I was pleasantly surprised – while the episodes were well over half a decade old by this point, starting before Tumblr famously learned it was not very nice to say slurs, they were genuinely kind as a base point. While it was the whip-crack smartassery that first endeared me, what kept me interested in MBMBAM was the insistence that they wanted to be empathetic to groups typically shit upon by the internet at large – namely, furries. While the brutal jokes never stopped, there was a marked difference in application; laughing with the furries and their rather harmless peculiarities, rather than at them. Now, did I take on that lesson? No comment. But it’s all pretty basic stuff, and I don’t mean to praise what should be common sense. So I continued listening, and really became hooked around the ‘Giant Scott Bakula’ goof. It had me cackling – for those who have heard me laugh, my cackle can summon vultures if loud enough. So, based on the darkening skies once my Maleficent cackle went into cacophony mode, it was really good. And as time went by, I started to get the impression that maybe this wasn’t something too good to be true – that these brothers were, despite self-admitted slip-ups that honestly did not bother me in the slightest, different from what had almost always failed me before. These McElroy brothers were genuinely nice people just wanting to goof off, without alienating their audience or succumbing to the prevalent dudebro culture of ‘ummmm having empathy? kek’. More importantly, they wanted to do so while providing a sense of safety, becoming more and more conscious of their status as ‘soft boy’ masculine models within their fanbase. Instead of becoming inured to their environment after attaining success, they became even more conscious of how many young people, especially young and stereotypically ‘geeky’ guys, were starting to genuinely adore their presence in their lives, especially once their branding of ‘brothers’ and ‘family’ became a key part of audience participation in their work.

I had started listening in mid 2017, and was about halfway through by August of that year. By that month, the biggest test of the McElroys ‘self-aware and emphatically empathetic geek’ personas was about to happen – #MeToo, and the realisation that one of their most essential employees in Polygon had, by all accounts, been credibly accused of manipulating underage women into sending him nude pictures. It was a big moment – Nick Robinson (not the Love, Simon guy, lol) had been a key part of creating their most viral content for Polygon, and had been associated with the brothers for years at this stage. But, as fans came to take a massive sigh of relief about, Griffin and Justin, along with the rest of Polygon, did not go down the Netflix re: Kevin Spacey route of waiting to see if the allegations would blow over before making any serious judgements. Robinson was thrown out almost immediately, with the investigation being swift yet thorough. While I again don’t want to praise what should be common sense, it reaffirmed fan dedication to this family and the causes + organisations they stood with; they could be trusted to place safety and accountability over one’s contributions to entertainment, a problem that Gamers™ and Geeks™ still, as communities, are figuring out how to adequately deal with. Or if they even want to.

I think these brothers are adorable, and their comedy dynamic is approaching legendary status, especially once their father became involved in their work and provided an overarching father figure of goofdom to the fanbase. But their importance lies in their unashamed embrace of emotions, and the empathy that allows all the snarkery and all the foul-mouthed references to have a grounding in human respect. Well, unless you’re a Juggalo. There are limits. But they’re a rare accepted presence of the sort of masculinity that isn’t often accepted – the kind that, if not written off outright as ‘soy boy’ bullshit, is treated with suspicion. Sometimes, for good reason; how many guys do you know that have played off their apparent sensitivity, all to realise that this same sensitivity has just been the game of trying to get some confused pussy? But this inherent suspicion is part of the problem, I think. These brothers are representative of the kind of lessons that we want to teach our brothers and our sons and what have you – closing yourself off from expressing yourself, whatever it may be, just doesn’t work. There are limits, obviously. No tolerance for intolerance and so forth. But these brothers represent a fundamental lesson of healthy masculine growth – there’s no shame in not being an alpha male, or not matching up to whatever masculine ideal you hold dear. If you wanna be a geek, fucking go for it! D&D sounds pretty fucking cool. Just be kind to people, and take care of yourself. Skincare isn’t gay, bro. Nor is emotional health. While we have come far in talking about mental health in males, how an unempathetic power structures can alienate and transform young men into something scary, sometimes it isn’t even about that. For all we go on about toxic masculinity, there are times we occasionally fail to provide appropriate rebuttals in the forms of good role models. The intentionally general statement ‘Men are trash’ is a saying I love, but I’m the first to admit that sometimes I’m mocking and cruel without providing an alternate role model for those same ‘trash men’ to look at. I guess I just want to say that while the McElroy brothers aren’t everyone’s idea of a positive male rodel, I think that for many young boys, especially ones that just wanna talk about Star Trek and Giant Scott Bakula and dick jokes, you could honestly do a whole lot worse than these guys.