Leela Corman’s Underdogs Fighting for Themselves 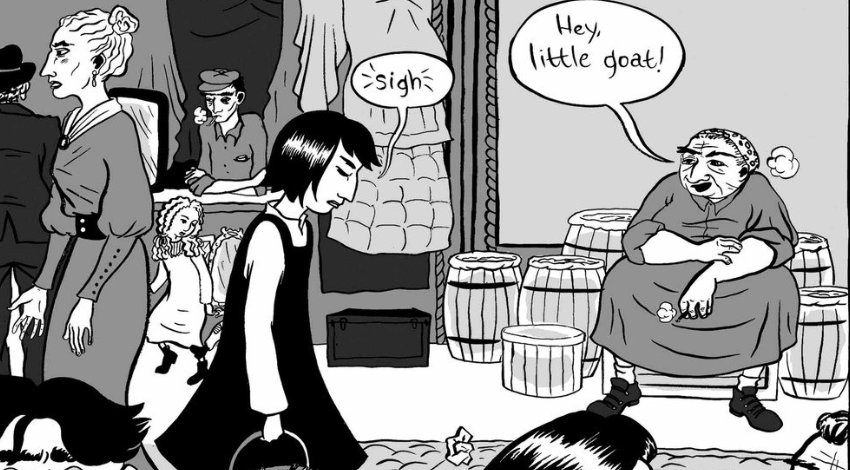 Immigrant this, immigrant that. To be an immigrant is to have an inherent link to a politicised term, to be a traveller of two worlds, but never quite enough for either. In Leela Corman’s Unterzakhn, Yiddish for underdog, represents the fighting spirit of the immigrants of past, present and future, and what it means to overcome the label of being an outcast.

Unterzakhn is the tale of two siblings in the early 1900s. Esther and Vanya are second generation Jewish immigrants in New York. And what does it mean to be an unterzahkn?
Strays kicked to the curb, snarling and starving in pursuit of their feed, longing for that warmth and companionship. And cold cities do little for strays, we learn as the story goes on. They do just as less for newcomers like Esther and Vanya. As they grow older, they are constantly negotiating the role of making it as immigrant women in an unforgiving city. Born to a seamstress and an itinerant tradesman/farmhand, Esther and Vanya’s story starts with their childhood of longing for more and their precocious observation of a lower class neighbourhood.

What caught my eye was the uncomfortable art style, it is simplistic, free flowing with large brushstrokes. Reminiscent of the dreamlike quality of Chagall, we are reminded of a dream that is uncanny, one that we want to get out of. We are reminded of the dreams that come with making a new life in a new country – but there are nightmarish elements and discomfort in having to prove one’s self always and to be reminded of the relentless negativity towards you as an immigrant.

Vanya’s story starts as she and her mother assist a woman who appears to be having a miscarriage at the local market. From there, she catches the attention of a woman doctor who sees potential in Vanya to be her protégé. This is no ordinary doctor, in addition to obstetrics and teaching Vanya literacy and science, Madame Doctor carries out secret abortions and distributes contraception. Vanya aspires to be an emancipated woman like her mentor but longs for love and marriage, which are strongly discouraged by her mentor as slavery for women. Madame Doctor has certain rules for her services and mentoring, that her protégé must not be married and that sex workers are exempt from her help. This is one interesting and notable element introduced by Leela Corman as author, a clever critique of the moral absolutism that can come with historical retellings. Vanya and her mentor would be heralded today for their advances in healthcare and information for women but Corman reminds us that morals were different back then. Particularly of what makes an ‘acceptable’ woman. There are no black and white heroes, only grey interpretations of moral standards and doing the right thing.

Esther’s story on the other hand starts with her helping out a regular customer of her mothers, a madame at a local brothel. Esther is allowed to help the brothel for errands, in exchange for ballet lessons from the madame, a former dancer. A horrific incident leads Esther to be forced to start working at the brothel as a sex worker. Through this, she never forgets her dreams of working in show business, and endeavours to work towards it. Esther’s destiny is harder to distill a message from. Her arc is defined by men attempting to save her. Is this a lazy way to find a happy ending with the possibility of a knight on his white horse? Or would that have been Esther’s only option as a woman in the 1900s? Is this just reiterating the values dissonance at the time or has the author unknowingly undermined her Amazon battle cry? Regardless, Esther’s arc downplays the potential of a greater role of her agency and seems to reiterate that women’s relationships with other men are mainly defined by sex. This is a murky turn for what could have been an arrival of delta of other great literature on women such as The Handmaid’s Tale.

Speaking of fairytale tropes, Unterzakhn uses plenty of symbolism from fairytales and Jewish mythology, especially when Esther and Vanya’s tale overlaps with the story of their father. Their father moved to America to escape pogroms (violent riots aimed at Jewish communities) in what is presumed to be Russia. Having to be inventive for survival, to have hope to sustain you, to see the world in the way of good prevailing over bad, these are elements of not only heroes in stories, but the heroes of our own stories! Us and those who came before us in our families to struggle to pave the path for us. This is a great strength of Unterzakhn, conveying continuity and solidarity the stories in our families.

The book uses considerable amount of Yiddish terms and phrases with no translation or glossary. This may make it more difficult for immigrant audiences outside of the United States to understand. The only reason I got by on understanding the language was because I binge watch episodes of The Nanny. If you are willing to put that extra effort to deduce and discern the meaning of phrases, you will see that Esther and Vanya’s experience is a tale as old as time.

Ultimately, Unterzakhn is a good read of an often untold or misunderstood perspective, one of immigrants but also a story that has significance to women and Jewish communities. In a tale so long ago, the struggles remain the same; the fight for bodily autonomy, a sad reminder of what dangers women have to go through for freedom. The fight for recognition in the entertainment industry as a young and naïve artist in a male dominated industry. The fight for the recognition of your pain. The fight to feel like you belong. These are all stories of today, too. An underdog’s story is not one of sadness, it’s one of fighting.

For fans of: Habibi by Craig Thompson, Persepolis by Marjane Satrapi, Pan’s Labyrinth