How fa’afafine use indigenous dance to reach resilience and healing.

Dance has always been a universal language but with some members of a minority group within the Pasifika community – it’s been used to heal intergenerational trauma, garner confidence and reconnect with a culture that hasn’t been fully acceptive of their identity.

Mario Faumui calls fa’afafine using dance as making “noise with our bodies”. Faumui is a gay Samoan, with mannerisms and energy like a fa’afafine.

Fa’afafine is a gender fluid role in the Samoan culture, often considered a third gender.

Fa’a means to be in the manner of, and fafine means woman.

They are biologically male Samoans who have effeminate mannerisms.

In Samoa’s culture, fa’afafine are accepted and considered a part of the society but when Christianity arrived, the narrative flipped and they were viewed as comedic relief.

Colonisation labelled them as morally abominable.

It was in Bible verses like Leviticus 20:13, condemning the practise homosexuality and its detestable sin, that left fa’afafine feeling suppressed, even though they were a renowned third gender in Samoa.

It’s this complexity that leaves fa’afafine in a confused state of their spirituality or religious affiliation.

Same-sex marriage in Samoa is illegal. This means fa’afafine are often caught in the margins of being tolerated culturally but shunned for their sexuality.

For some fa’afafine, it’s become a journey of acceptance and emotional trauma, trying to find a place in both worlds.

A fa’afafine public servant, Simeonica Tuiteleleapaga, was asked by a Samoan male colleague if she was a woman, subjecting her to harassment asking her to prove she was a woman by telling her to take her skirt off.

These types of experiences can trigger trauma reactions, ranging from numbness, self blame and feeling ultimately helpless.

For some fa’afafine, the medium of dance has been used to garner healing from emotional trauma of being who they are.

Dance has been a way to heal intergenerational trauma, a portal that can revitalise lost dormant histories within colonisation.

It’s been used to garner confidence, an emotional outlet to move trauma in the way one can se’e (glide), whilst doing the siva Samoa (traditional graceful Samoan dance)

It’s in the way one gracefully moves one’s hands, putting them together to pati (clap) and po (closed clap) to create an abstract story of internal struggle and strife creatively.

Dance is viewed as healing evoking spiritual connection, as well as reconnecting and gaining a form of cathartic nature that can ultimately connect one with their deceased loves with movement.

Dance has been so important for fa’afafine.

It heals, it feels good.

The siva Samoa allows one to align with their tripartite selves: fa’aleagaga (spiritual), fa’aletino (physical), and fa’alemafaufau (mental).

For me, my journey in finding healing with dance has been a way for me to connect with my ancestors and deceased ones, an unspoilt moment before Christianity and colonisation.

There are many ways to garner healing from emotional trauma, but I know dance can be that first step forward into healing for the mind, body and spirit, so that you can forgive, understand and move on.

Siva Samoa is one of those integral dances that has been least affected by colonisation and one I enjoy performing.

It is a language of decolonizing and indigenising my experience.

Dance reaffirms queer identity for fa’afafine, and creates a safe space for affirming intangibly that I find words cannot.

Every movement is one of healing, reawakening my indigeneity. 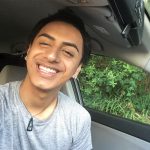