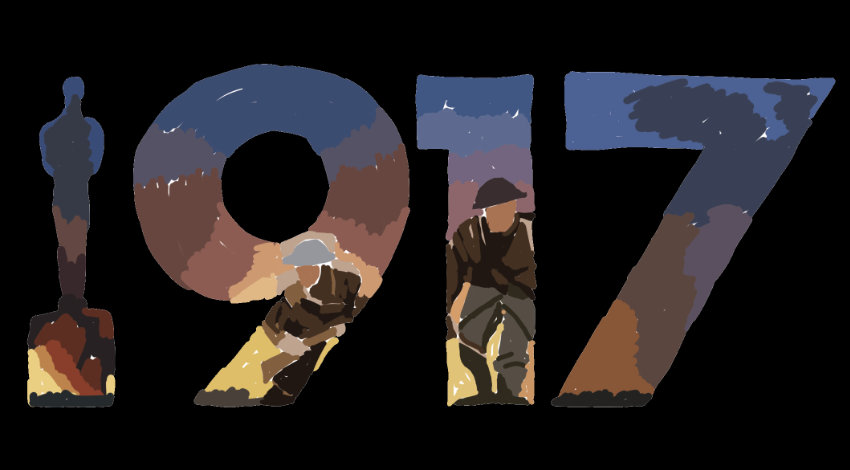 When asked the question at a preliminary job interview form for Auckland Museum, “Do you have any conflicts of interest?”, I woefully misinterpreted the question and answered, “Vietnam War, the Indochina Conflicts and WWI”.

War in pop culture has commonly featured WWII and Vietnam, having been so recent. Studying WWI in high school history had introduced me to stories that were worthy of being told, many undiscovered narratives of soldiers from colonies, conscientious objectors and perhaps the first war that had opened the world’s eyes to how modern technology could intersect with human-made horror. So when I heard the screech of the cello and bass and the pounding sound of the 1917 trailer, it was a siren call to the rocky shore.

What is Oscar bait?

Oscar bait is a category of movie that seems to be made with the intent on getting an award. This works by the virtue of choosing topics that appeal to interests of the Academy voters or topics that appear to have social or historical messages but may not be that profound or provocative in content. Internet forums and film critics have tried to find a common thread to such bait films. They claim that Oscar bait films include those which appeal to a privileged view of a post-racial America (e.g. Crash, The Blind Side or appeal to old Hollywood nostalgia (e.g. La La Land). But the film genre of the most automatically revered status? War films.

War is an emotional topic and no matter the nation, society sees great heroism and martyrdom associated with soldiers. This then lends itself to an elevated status of war films, where criticising them or thinking of them critically is almost implied as disrespecting the soldiers themselves. I raise another side of war, that is one of the most controversial and carnal parts of the human experience, it raises questions of human morality and the boundaries of humanity and survival. And in this part of the century, where civilian deaths are at an all-time high and where communities in other countries are facing a 1917 reality, it’s almost an affront to view war apolitically in films and to portray war as merely a story from the past.

1917 played it safe. There was little overarching political message about war or morality to tack the story together. In other words, 1917 was a cereal box with no cereal. A war film with no commentary on war. 1917 was nothing groundbreaking in the genre of war films, though it introduced new aspects which I hope would be more common in the genre for years to come.

The heroes were unlikely ones, people who were reluctant and were just dedicated to survival, and knew when to run. This reminded me of why we might have seen the appeal in Jojo from Jojo Rabbit and Saigo from Letters to Iwo Jima. These were characters that reminded us of ourselves and our consciences in situations that would have otherwise been squashed with the amount of pressure from the social environment. The actors themselves had previously played roles as ‘best friend’ or ‘naïve every-man’ characters. This was a clear reminder of conscription at the time, of a real fear, than a masculine Rambo choice to fight.

The level of sound, the continuous take and the level of action was almost sickening, no glamour, only a step closer to the frightening truth. The film didn’t spare on the gore, dirt and infection, granted, this all would have been worse in real life, but it felt a lot more real than other portrayals. Interactions with civilians such as French refugees added to the appeal in this respect.

1917 is also one of the few films, like Days of Glory, to showcase soldiers from the colonies and different regions of the UK with rag-tag teams of regional British accents, Punjabi soldiers and black soldiers. This representation is a huge service to many in colonies who fought and whose stories had previously been overlooked. But representation isn’t enough to save a film that has far more potential in terms of its message.

All in all, 1917 was good, but played it safe and there was no secret sauce to hold the burger. Many scenes were geared towards making a physical reaction including extremely loud sounds and the unsettling droning strong soundtrack. Many scenes verged on jump scares. While this makes for engaging viewing, there is always a risk that physical reaction outstrips the film’s ability to create more subtle, gutwrenching, emotional and powerful moments. And it is the latter which to me, cuts to the core of why war stories have endured through human history.

Instead of this, try: Days of Glory, Letters to Iwo Jima, Full Metal Jacket, Indochine, the ‘Elegy to Dunkirk’ scene in Atonement.