Hi, um… I made a playlist for you x (or Sherry digs into her Spotify to pull out the playlists of ex-girlfriends to get another byline) 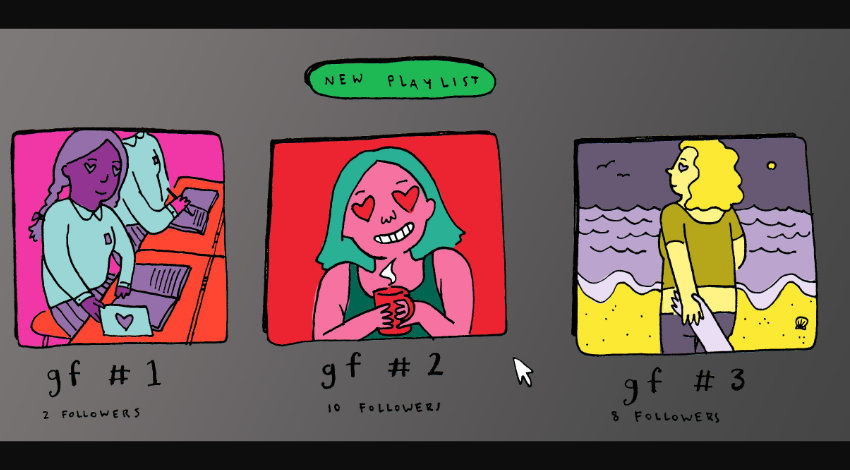 I started getting crushes on people from a very young age. Um… Year Two to be exact. He had brown hair, was really good at soccer, and all the other girls liked him too.

High school only increased the frequency. My lack of spine, and desperate yearning to be liked meant I once had the whole discography of Coldplay on my iPod shuffle. I don’t know how much I actually liked Coldplay. I don’t know how much I actually liked The Smiths and the Velvet Underground. Except with the unbridled knowledge that was what the moody floppy-haired boys I liked listened to. I ran a tumblr blog of all the indie band boys I swooned over: Alex Turner <3.

I’ve mixed it up with some actual personal favourites (to show character development):

Playlist one: It’s 2013 & ur never actually going to talk to the cute boy in jazz band

In an expected turn of events, my infatuations gave no fucks to gender boundaries. My first girlfriend and I would write love letters to each other in stats class: very cute! Before we were even brave enough to admit our feelings to each other, she wrote me a playlist on this scrap piece of lime-green-milkshake coloured card. Big shout out to S.W, sorry for breaking your heart when we were 16!

Then I was seventeen, and I had another girlfriend. How did I find myself another one? I don’t know. Perhaps going to the largest high school in Australasia gave me a larger sample pool. My way of flirting with M.M was by asking what her favourite 1975 song was, smooth Sherry. Fucking smooth. I also got my heart broken for the first time, and thank god Lorde released Melodrama when she did.

Playlist three: M.M It’s all g we met up for our post-break up coffee last month

The third heartbreak. More adult now! Hurts more and less at the same time, because you know you can pick yourself up again, but man, your chest is tired! Big shaka brah to the girls on my debate team in Dunners when shit went up the fan!! (who all offered to send me their post-breakup playlists). A Fun Fact: for those who read my column last year, the start and end of this relationship is now immortalised in Craccum, so thanks UoA!

Playlist four: Sometimes you’ll never get the post-break up coffee you want.

I haven’t really been single for more than a few months since my first relationship of 16. I haven’t not been pining over someone, or absent of butterfly crushes since my first one on Orlando Bloom: aged 6.

This year I’m going to be aggressively single, 2k19.

But I’m an overly romantic ENFP Virgo with Gemini moon rising. It’s a lesson I didn’t think I needed to swallow until I drunk called my summer-fling. She replied, all the way from Adelaide: “okay Sherry it sounds like your love with the idea of being in love with people, and you are doing a shit job of being single.” And like any good student magazine editor, she hung up and sent me an article on how she learnt to let go. (Bailey take notes: this is how I expect editors of Uni magazines to shut me down when I drunk hotline bling them).

But she was right. It was a kick up my bum that I needed to be young, and spend some time figuring and cementing myself, by myself. I commend all the high-school sweethearts and completed wholes out there, but I did not get Spotify Premium to make break-up playlist after breakup playlist.