From A to Zine

Originally, zines were for fucking nerds.

While people have published and distributed their own opinions and content since the printing technologies allowed, the zine format rose to popularity with the development of science fiction fanzines from the late 1930s. Piggybacking off of communities founded by magazines distributed more widely (such as Amazing Stories), sci-fi fans began mailing smaller zines to each other. The form then spread through intensely geeky fandoms. Spocknalia was one of the first notable fanzines, created by self-identifying Lunarians (yes, they really called themselves that). However, a stroll through any Auckland Zinefest event in 2021 would have you second-guessing these origins: the majority of people attending are intimidatingly cool. Any hint of geekiness only serves to make them more endearing.

A zine, for those unaware, is usually a locally-circulated, self-published mini-magazine, most traditionally assembled by folding just one A4 piece of paper to create eight pages. The aesthetic style of zines can obviously differ massively, but there is a certain graphic, collage-y, DIY style that’s become heavily associated with the form (illustrated by our lovely art and zine centrefold this week). After they were popularised by science fiction enthusiasts, zines were also heavily circulated by fans of comics, horror, rock and roll, before exploding within punk subcultures in the 1970s and the riot grrrl feminist movement in the 1990s. Fandom and fan communities have proven to be perfect sites of circulation for zinesters, as there’s a clear shared interest that facilitates connections. Of course, zine-making is a highly accessible practice, requiring only a pen, a piece of paper, and a perspective. This means that there’s virtually no limit to the type of stories told, and no topic is off limits. Zines can be political, raunchy, wholesome, heartbreaking, informational, personal, and silly, and go the rounds in lots of different communities.

Once the internet became more widely accessible, the popularity of zine-making and the circulation of zines has seen a decline (digital spaces afford similar opportunities for connection). However, in Tāmaki Makaurau, there are a variety of zinesters encouraging circulation and creation. The Zinefest, which started in 2009, is now a yearly event that stretches across the whole month of July, and aims to celebrate creativity and self-expression, zine culture, small press, and all things DIY. The festival returned to real life this year after virtually soldiering through COVID lockdowns last year. Catalina Nunez Elevancini, a member of the Zinefest organising committee, discusses her affection for zine-making: “What makes it unique is the way they are used by people to share their experiences, craft, and ideologies that are underrepresented in mainstream media. I think this is what truly makes zines such a big, exciting thing. It’s made by people for the people.” That sense of community reaches far and wide, with an incredibly diverse range of zine-makers showcasing a huge range of topics at the Zinefest market. Catalina says, “We’ve got over 80 stallholders, from all genres and skill levels. From personal zines about your cats or family, to political zines about prison abolition, there is honestly a zine for everyone’s interests.”

Zines are, of course, not only circulated during the Zinefest; they’re published all year round. Many groups have more consistently utilised zine-making as a point of connection within the city. One such community is the Migrant Zine Collective. Helen Yeung, an enthusiastic zinester, officially founded the Collective in 2017 when they published their first zine ‘GEN M’ (short for “generation migrant”): “The curiosity towards my own migration story, and journey towards navigating my identity as an Hong Kong-Chinese migrant woman really sparked an interest in creating Migrant Zine Collective…this was in the hopes of celebrating and reclaiming the narratives of migrants of colour. Myself and others wanted to build a space beyond mainstream, white-centred stories which amplified the complex histories for those living in diaspora. Our goal has always been to open up a space where people of colour can unapologetically speak up, discuss and unpack critical issues.” Helen explains that they chose to utilise the zine format to distribute stories of migrant communities because of its inherent accessibility and the form’s roots in activism. They cite their personal experience as a specific driver in the creation of the Collective: “I first found out about zines in high school when I was really interested in punk and feminist movements, it helped me navigate my emotions and frustrations as one of the few people of colour in my school.”

Nadia Amran Safi, an artist who has just printed a batch of their very first zine My Afghan Dream, also explains the way that the zine format has allowed them to represent their own experience and challenge dominant media narratives: “I have always felt like Afghan culture is one of the most misrepresented and misunderstood cultures in the world due to the news media and the constant military operations happening there. Growing up immersed in Afghan culture, I have always known that there is more to the place than [coverage from mainstream news media], so that is what sparked my interest in making what is hopefully the first of many zines about Afghan culture.” As Nadia affirms, zines allow for artists to share the things that they’re passionate about, with no restrictions to entry. Catalina encourages those curious about zine-making, like Nadia, to get involved (even if there’s an nerdy element to the practice): “Your personal comic zine about your mental health, or shitty job, or whatever has a purpose and is valued by the zine community. I think the future is just exclaiming that everyone has something worthy of sharing in a zine. There will always be someone that relates to it and appreciates it.” 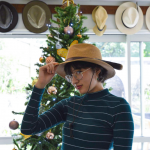