From colourful drinks to various takes on Asian cuisine, the options are endless. However, if you’re a bit indecisive, you may find yourself agonising over what to get.

This week, we set out to rank some of the offerings at the markets to make your life easier. Sampling all of it would’ve been one hell of a mission, so we picked the most attractive and popular-looking stalls. We bought a lot of food, ate a little of everything, and pretty much had to be rolled out of there. Was it ultimately anything special, though? Debatable.

Flora: It’s very tender, lots of flavour going on. There’s really not much else to say; it’s just delicious. Reminds me of the ones from Go-Go Music Cafe, perhaps better. Definitely our top ranking dish. It leaves you wanting more.

Auguste: Yeah, this is really good. They definitely haven’t skimped on the cumin, which is important. Very flavourful, good salt level. A banger for sure. Gets extra credit for being such a simple thing, but so hard to get just right—which this place absolutely does.

Flora: The bread is fantastic. I love the basil pesto on this. I don’t usually like tomatoes, but I can get behind this. The absolute underdog of the market. Gets extra points from me since the lady gave us some free samples.

Auguste: I thought the bread was delicious. The texture was right; the garlicky notes were really good, a nice bit of salt, not too oily. This definitely vies for first place. Don’t get the potato swirls like everyone else, get the fried bread instead.

Flora: This is thicker than other okonomiyaki that I’ve had. This is good, though. I just feel like I haven’t tasted much seafood?

Auguste: Not too thick and not too cakey, but still has good cohesion. Got some good sauce flavour coming through, and the pickled ginger is always nice. There’s octopus in here, so that’s a checkmark. If you want okonomiyaki at a night market, get this one for sure.

Flora: Ooh, I love the bun. So soft. Very chewy. Was not expecting it to be this good since I’m assuming it’s been sitting outside for a bit with the rest of the food. I could probably eat a bunch of these in a row—an absolute bargain, given its size.

Auguste: Definitely the cheapest pork bun here. Good flavour. The bun is good, and not too bready. Definitely up there with the okonomiyaki.

Auguste: Taste is good, but it’s cold and kinda pink in the middle. Some heat definitely would’ve made it better. Probably wouldn’t get it again, though.

Flora: Mine’s not pink in the middle, but it is lukewarm. It’s not bad, but it’s nothing special. Gotta say, it’s super impractical. Why would they give us a skewer to eat this with?

Flora: I thought this would be hot, or warm at least, but this is cold. The pastry is nice and flaky; it’s light and not too thick. I’d probably like it better if it was warm, but the egg tastes pretty good cold.

Auguste: Three selections on dodgy noodles—this is just a classic of the night markets. It may not be authentic, but it’s a classic. The sweet and sour pork is cold, and the barbecue pork is very interesting looking. It’s fine, not the best I’ve ever had. Can’t say I’d go out of my way to recommend it. 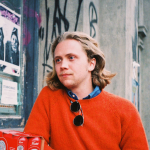