My Ongoing Journey Towards Self-Acceptance.

Recently submitting to the Justice Select Committee on the Conversion Practices Prohibition Legislation Bill allowed me to vocalise how fellow members of the rainbow community should be protected from torturous indoctrination of homophobic and transphobic ideas. I want them to feel pride in themselves. I’d hate for future generations of queer folk to grow up with the same self-rejection that I experienced when I realised I was queer — an experience that seems far too universal for many.

When drafting my submission, I reflected back on my own self-acceptance journey, and wondered a lot about when I’ll feel ‘pride’ — a step beyond acceptance, something I imagine involves a celebratory component. That’s the end goal, isn’t it? That’s the pot of gold at the end of the rainbow.

I first realised that I was not straight at age thirteen. This awakening was not accompanied by feelings of pride. In fact, I’d have done anything to change who I was. I believed that as a matter of necessity I ought to suppress this identity by convincing myself I was only attracted to men. I sought to conform. Committed to this goal, I invested my teenage years in a performance of heteronormativity to deceive myself.

At eighteen, I fell in love, and not with a man. At this point, I realised I could no longer suppress my identity. Reality had crept up on me. Once again, the feelings of guilt and self-disgust that had terrified me so much at thirteen years of age returned.

I had been someone who actively tried to suppress their queer identity as soon as they discovered it, but, after years of hiding myself, I realised there was no point in my dedication to this pretence. It wasn’t authentic and it was exhausting. But, retiring as an actress was not complete upon this decision to come out. To this day, I am still extracting my gender and sexual orientation from the confines of the person I taught myself I had to be. I was so desperate to become someone else, I feel as though I lost part of my authentic self that may take years to recover. For this reason, labels and categories intimidate me and make me stressed. I can’t tell you in one word who I am. However, the good news is that, since trading my camouflage for platform Doc Martens, I have found hope in the LGBTQIA+ community: a group I will fiercely defend and be grateful to for the rest of my life. To me, this is pride.

I slowly built connections with other queer folk who showed me the beauty of our community. I found pride in one dear friend in particular, who I initially bonded with over hijacking a party playlist to play girl in red. With him, I attended my first pride event, where he introduced me to a wonderful group of people with whom I felt at home.

A few months later, I encountered someone who I quickly began to look up to. I admired her because her pride was visible in how she carried herself, dressed like a fairy in dungarees and colourful hair. She was real not only in her external self-expression, but in her words — with the type of satire wit and light-hearted approach to life that I appreciate. Having been inspired by observing the authentic people around me, suddenly I wasn’t just committed to stopping hiding, I also wanted to be seen.

From then onwards, I started to search for pride in every corner of our community. I have fallen in love with queer nightlife. I emailed my local bookstore and inquired about queer literature hoping to find myself in my people’s stories. I am now halfway through Radclyffe Hall’s “The Well of Loneliness” and have successfully recognised parts of myself in the words. I majored in Gender Studies at University where I finally had the freedom to put words to my experiences within discourse about identity. I spoke up; I had conversations with friends, both new and old, during which I actually let them hear me for the first time. I attended protests to support my community. I even shouted back across the road at homophobes.

My search has taught me that the journey to pride looks different for everyone, and is not always linear. However, what I can promise to anyone reading this, is that if you’re looking for pride in yourself, start by letting yourself engage with our community. Before you know it, pride will have found you. 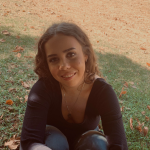