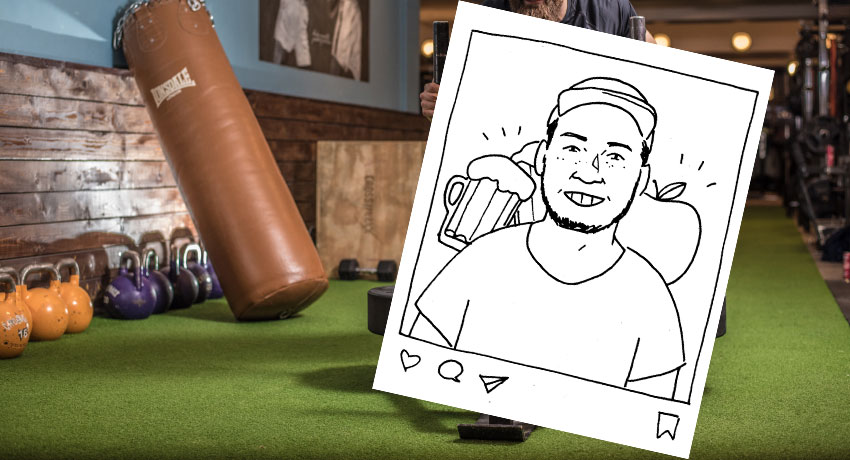 Considering last week’s horror start, it felt only right to really give my #fitspo journey a more considered effort this week. Come Sunday night, I readied myself for a productively healthy week. Each morning was scheduled to be greeted with a shot of apple cider vinegar and every second night was to be spent in a gym or moving in some physical capacity; the time between would be filled with healthy food and gallons of water. I was determined to make this work. I mean, how hard could it really be? I was, after all, fairly proficient in the art of taking shots, and although my current shape wouldn’t suggest it, I was once a fairly efficient athlete. Surely it would all come very naturally to me.

Upon my first morning of the week, I became more attuned to the reality of the situation. Now, I’m pretty well acquainted with fighting the desire to hurl after taking shots, but never have I felt this so overpowered after only one – and with no real alcohol content at that (I was disappointed to find this out despite the inclusion of the word “cider”). When looking for words to describe the taste, I could only think of the word “yuck” which, all things considered, felt most fitting. I mean, the smell of the stuff was bearable enough, and I’ve taken various shots which looked much less appealing, I really didn’t think there was anything to worry about so down the hatch it went. Within a fraction of a second of ingestion, I quickly realised my miscalculation as my eyes welled up, nostrils burned and my tongue tried to detach itself from my body. To be completely fair, it does have some hint of apple but most of this is masked by the nastiness of the taste associated with the other words on the label – acid and vinegar. Remembering that I had committed myself to doing this for at least the rest of the week, I was overcome with a profound feeling of regret. Nonetheless, I would persist. As it so happens in life, things which are touted to be good for one’s health are often uncomfortable to undertake.

This would also be true for my attempt at physical activity. When time came for me to get physical, I donned my running shoes, walked out the door, sat on the front steps and began mentally preparing my route. This task needed careful consideration because I wasn’t sure how my fitness would hold up thus I needed to be able to make it back from wherever my half-way point was going to be. Of course, this much planning had to be undertaken with all the prudence I could muster and with Einstein’s words echoing in my mental – “I believe that pipe smoking contributes to a somewhat calm and objective judgment in all human affairs” – I lit one up to assist in my calm and objective judgment. What sort of fool would I be to not heed the advice of the smartest man that ever lived? In any case, stuck for ideas, I decided that a walk to the mailbox might conjure some inspiration – and it did. As I arrived at the mailbox, sweat dripping from my forehead and wheezing audible, it became apparent to me that this was about as far as my legs would carry me. “Baby steps” I thought deciding not to over exert myself, “my next ‘run’ will down the street. Baby steps.” The next day, after swallowing the horrible morning liquid, I began to feel the effects of the previous day’s ‘exercise’. In my legs I detected a slight ache and, if I’m being completely honest, I felt a kind of pride. The kind of pride I imagine those #fitspo types are trying to portray in their instagram photos with captions such as: “train insane or remain the same”, “sore today, strong tomorrow”, “health is wealth” etc. I suddenly felt part of the in-group and, with infused inspiration, decided to hit the gym that afternoon.

Walking into the gym, I scanned my memory but couldn’t quite recall the last time I was there. Things did look familiar, at least, and I did remember the importance of warming up pre-workout. I found the ergometer and sat down. At first it felt fairly natural as I let my ‘muscle memory’ take full control. After five minutes of simulation rowing I remembered why I left the damned sport. Legs burning, lungs collapsing and heart convulsing uncontrollably, I judged that the 5 minutes and 33 seconds I had spent on the machine had me more than warmed up – possibly overheated with energy levels already close to maxed out. Now at this point I was ready to give it all up, I questioned if the pain was worth it and began to really notice how drained I felt – I attributed this feeling to the days diet which consisted mostly of lettuce, tomatoes and a can of tuna (those are healthy foods right?). In any case, the feeling of giving up was only overcome when I remembered the hashtags I could include in a future instagram post: #gymlife #health #fitnessmodel #getonmylevel. With this in mind, I decided to pick up some weights and toss them about. “Shit” I thought as I heaved a pair of dumbbells, “I don’t remember 10 kgs being this heavy. #wtf.” I clumsily stumbled through a lifting routine I recalled from my wasted youth and, feeling pretty good about myself, ended with a spot of stretching.

The following morning I was greeted with an odd feeling. In some ways it felt familiar, although it also felt quite unique. Many times I’ve woken up with a hangover but never have I ever quite woken up with the feeling that my legs were hungover. My attempt to get out of bed indicated that this hangover was also in my arm and chest muscles. This was apparently the expected aftermath of physical activity and standing in my kitchen that morning, body barely functioning, virtually crying, after just having had another shot of apple cider vinegar, a few things occurred to me:

That said, I decided to abandon the rest of my plans for that week and get seriously smart about what I needed to achieve and how. It was time to call in some professionals.