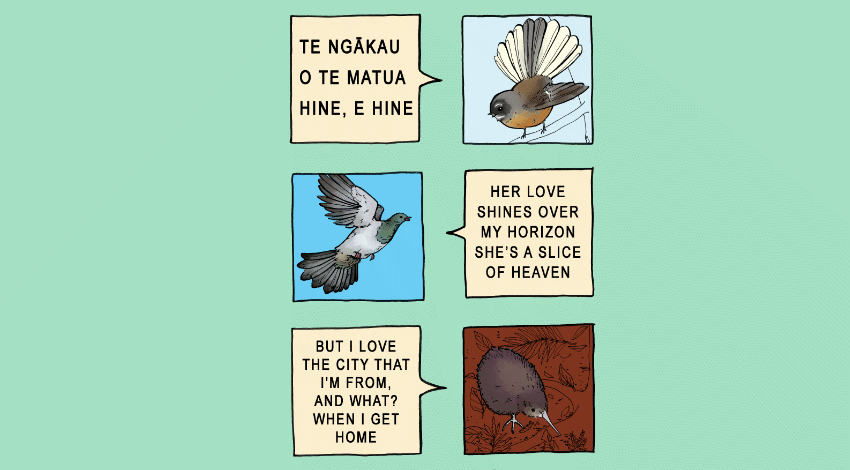 New Zealand Music. From Ben Lummis beating Michael Murphy on New Zealand Idol, to Dave Dobbyn playing at Rhythm and Vines, Kiwi’s have a long and proud history of making some pretty choice music. To celebrate New Zealand Music Month this May, we asked some of our student body what their favourite Kiwi song is:

For me it’s an absolute classic kiwi banger, plays at any big event and, makes me weirdly patriotic. It makes me appreciate NZ as my home, because it’s that song that’s been around my whole life and I associate it with all the good things about NZ

I’m a born and bred Aucklander (unfortunately) and this song just makes me feel so happy every time I hear it. I think it’s all in the backing but also the story it tells.

First song that popped into my head.

There is no depression in New Zealand – Blam Blam Blam

The song is a big satire of the whole “she’ll be right” mentality that NZ has. We still have that culture that promotes just kind of ignoring your issues and not working to rectify them (mental health, drinking) or acknowledging more wider societal issues (racism, sexism etc). The song itself was written during the Robert Muldoon era which was a big deal (TM) at the time. Also there’s a bit in the vid with the guitarist dressed up as marmite and vegemite and that’s a good laugh

Because my dad would always play it on car trips and when we were on holiday, so it reminds me of that. It just feels familiar I guess. Like I’ve grown up listening to it during happy times of my life so it’s associated with those feelings now.

First gig I ever went to was David Dallas at the Powerstation in 2013. He’s someone that cares about his community (including coming back to play a few O-Week’s as a UoA alumni) and I have a lot of respect for his work ethic and mindset. The song itself got picked for Fifa ‘14, which I love because it introduced people to the song, the album, David and New Zealand. And of course what Kiwi doesn’t love seeing their country up on the world stage.

It’s so well-written, dance-y, clever and kinda sad. For me, it encapsulates growing up in NZ

Far From the Tree – The Shambles

It’s a Māori Lullaby and I used to sing it at primary. I don’t know I just think its so beautiful and just so simple too.

The drama. The romance. The bad acting. Harry Warner. Holy shit, did you guys know Harry Warner is in the same year as me in engineering?

It’s literally the first thing that came to my mind. It’s very catch and I think the lyrics are sweet. Every single Kiwi knows it. The vibe is very New Zealand. Also it’s by Dave Dobbyn and Herbs! Like obviously there are newer artists with great kiwi bangers but this is an OG.

It’s a beautiful slow-moving rap about Tom Scott’s thoughts on the meanings of home, community, family and friends and how New Zealand’s history has impacted on these things for many people. Coming from a different side of Auckland from me makes it very thought provoking and moving, along with the rest of the album, which is one of the best of last year. A few days ago they won the best album of the year (Taite Music Prize) too which is super awesome!

Lorde gave us a self-conscious depression banger not seen since Robyn dropped ‘Dancing on my Own’ and perhaps only matched by ‘Nobody’ by Mitski since. Not bad for an Auckland girl.

I always sing it around mates and when I was growing up. Loyalty is a good thing – and I like good things.