Craccum Investigates: The Best (and Worst) of Random Introduction Lectures 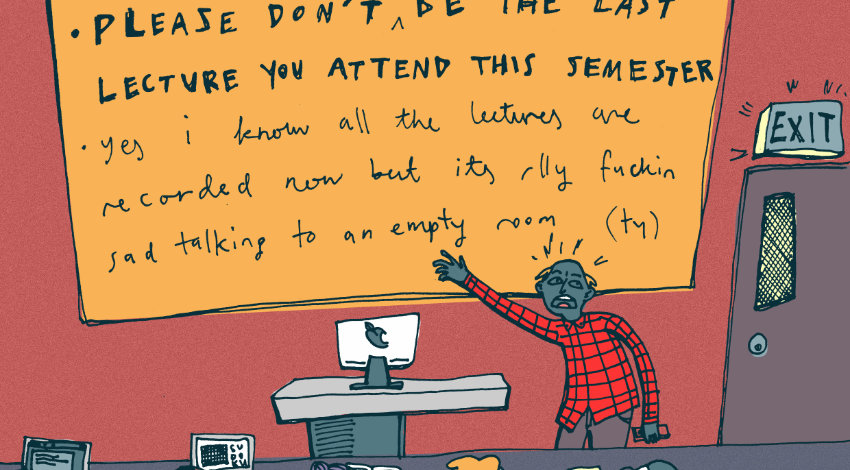 During week one of Semester Two, the craccum team bravely dived into some random lecture theatres to review some of the best lectures on campus. These are definitely not the best lectures on campus but with eight different faculties and countless lecture rooms, it was going to be impossible to find the best. We chose week one for the fact we thought the introductory lectures would be easier to understand. While we weren’t entirely wrong, this didn’t stop disaster striking, with one lecture-hopping mission being aborted midway through by a stealthy (Features Editor Note: Not stealthy at all) exit.

The last time this team tackled an investigation, we conclusively managed to pin the Madeleine McCann disappearance on a prime suspect. Unfortunately, as of yet, no charges have been pressed against the Jewel of India takeaway downstairs. Thus riding high on our previous success, we decided to confidently tackle this next investigation! So continue reading as Craccum uncovers only a few of the best (and worst) of courses you couldn’t care less about.

I feel it cannot be stressed enough that we had absolutely no obligation to attend these lectures. In fact, it’s truly a wonder how we managed to pull this off as some (all) of us struggle to make it to even our own lectures.

Wandering through the Human Sciences Building on a Monday afternoon, we saw a girl open the door and walk into the large lecture theatre HSB 1. Curious, we follow her into the room. Our interested is immediately piqued as a portrait of Tupac graces the projector screen.

Claudia: So we’ve ended up in ‘the Bible in Popular Culture’.

Brian: Most of the class do not look thrilled to be here. The girl next to me who was nice enough to start a conversation picked this course because it was the only one that fit her timetable.

The lecture begins and the lecturer, a lovely lady, has introduced herself.

Brian: One of the tutors has a twenty-letter last name. Must be a nightmare for IRD tax forms.

Claudia: We’re given the classic spiel about where to find readings on canvas, whether lectures are recorded etc.

Daphne: One of the learning outcomes is to enjoy the course! Which personally I think is just lovely.

Brian: It sounds like the majority of the class is graded by an essay. Good thing this is bible studies as it sounds like many students will be needing help from God to pass this course.

Claudia: The lecturer mentions to students “some topics may be challenging or confrontational for some of you.”

Daphne: “Is the controversial content where people are confronted with the fact that Jesus isn’t white?”

The lecturer starts to give a breakdown of how the course will be structured.

Claudia: Some topics from the breakdown:

How Jesus is portrayed on screen and how this can cause controversy – his race, his ethnicity etc.

The ‘american monomyth – a template for so many figures in pop culture.

Daphne: I imagine that after this course you’ll start seeing prophets and messiahs EVERYWHERE.

Brian: If over 12 weeks, the lecturer doesn’t mention any South Park joke about religion, I’d be asking for my money back from this course.

The lecturer mentions an essay that can be written on how anyone (literally anyone) is portrayed in the media as a messiah. To top it all off, it’s only 500 words.

Daphne: ‘Harry Styles is the New Messiah!’  is an essay example and I would read that voluntarily.

Claudia: Apparently the most popular essay topic is ‘choose a contemporary figure and discuss why they are a modern messiah.’

Daphne: You can literally write an essay on anything as long as its general/main theme is just the bible. God, I wish I was in first year again.

Claudia: I miss stage one courses where the lecturer goes through the essay topics instead of just mentioning in passing that there is an essay.

Claudia: Another question is on apocalyptic themes in popular culture – I feel like there are going to be a lot of Avengers: Endgame essays this semester.

It’s the highly anticipated moment where the lecturer is about to wrap up, but instead of letting everyone go, she eagerly insists we stay to watch a trailer she made herself of the upcoming weeks. She opens up a powerpoint – already, the signs are not promising.

Daphne: We get a preview for what’s coming up and she begs us not to pack up yet.

Claudia: Omg. A PowerPoint slideshow with music, I wonder how many hours this took.

Brian: I recognize this music. Apparently our lecture was sponsored by Mobile Clans.

Verdict: The lecturer is a lovely lady, the course seems well interesting and the students look like they’d rather be anywhere but here. It’s like every GenEd anyone’s ever taken! Ever!

In typical fashion for me, I ended up missing this lecture. It turns out that when your motivation to attend your own lectures is already low, when you’re supposed to attend another random one just for interest you feel even less motivated? Who would’ve thought. Regardless, I realised about 7.45am I wouldn’t be making this one, and so I got on the bus at 9am. I got to the lecture theatre at 9.40 and found the lecture I was missing was a Stats 10x stream, which to be honest I’ve done anyway. Although judging from my grade I could honestly use with brushing up on.

I browsed the lecture theatres on the ground floor of the Maths and Physics building. I had four options: PROPERTY 311, COMPSCI 320, JAPANESE 150 or GEOG 140. Considering I am an Arts student and that COMPSCI is far out of my depth, I decided to dive headfirst into the deep end and sit in on COMPSCI 320.

I chose a row towards the back of the lecture theatre, I sit alone. There’s a student coughing behind me loudly, I look forwards to falling ill sometime shortly.

One student chooses to sit on the fold out table seats right by the door – it’s a bold power move. I decide not to google up what this class is on, simply I’m going to surprise myself. I notice a lot of students sitting alone. Whilst I would say that this might be an indication of what COMPSCI students are like, in reality I too am sitting alone so I can’t say shit.

The lecturer arrives – he’s a tall man with a big moustache. He’s rolling through slides that say ‘Algorithm Analysis’ – this is apparently part two of a two stage course – fuck.

I am reading the slide points and I cannot understand any of the points. He is releasing his first programming assignment and honestly I don’t envy this class.  They’re talking about Turing machines which I know only because of Alan Turing. I am the only one typing in the lecture theatre. Toto, I don’t think I’m in Kansas anymore.

I knew long before this class I didn’t want to do COMPSCI but now I feel this decision is solidified. The idea of sitting here for a further 45 minutes is excruciating.

Okay so its halfway and I zoned the fuck out. He’s talking about polynomials, logarithms and then both polynomials and logarithms together! I dropped maths as soon as I had university entrance level and truly I have no need for it. I feel like I’ve missed a lot of the inbetween but yeah.

Verdict: Should’ve gone to property, or Japanese. That would’ve been easier to read than these maths equations.

Friday: A Classics Class? Leadership in Greece and Rome

Cameron: Due to me chronically running late and the fact the lime I wanted to take had died an unfortunate death, I was late meeting Brian. We had planned to go to a library basement lecture but the options were Stats 10x or Maths and I decided after my unfortunate Compsci experience I needed to swap. We made our way to the Clocktower where we sauntered into a lecture late, and quietly settled into the back row.  For starters, I think this is a classics lecture.

Cameron:. This is also a lectorial, so if we get called upon we are right royally fucked. They’re talking about something called Xenophon’s Agesilaus. The lecturer seems lovely, shoutout to her, she seems to know what she’s talking about.

Brian: I’m not sure I can engineer a solution to these problems. I’ve never taken a classics class in my life, I don’t know anything about Greek history except that they went bankrupt after the 2004 olympics.

Cameron: That information is probably in this course tbh. If I wrote an essay on greek mismanagement of money surely an A?

*at this point we googled what class we were in*

The lecturer wants us to split into groups, introduce ourselves and then elect a leader to report back to the class about the group.

Cameron: I’m going to play along. This is my new life now. I’m a classics major. I can’t break my journalistic cover.

Whilst Cameron spoke a big game, he did not have the balls to follow through. Whilst Brian was game to fake who he was and join a group, Cameron was not and so he panicked and skirted out of that room as fast as he could, Brian in tow.

Brian: In a scene I can only describe as mirroring Mission Impossible: Ghost Protocol, Cameron decided to execute his own Ghost Protocol and sneak out of the lecture. Meanwhile, I just walked out like a normal person, to find him crouching outside by the doorway.

In our immense shame, we just resorted to sitting outside the Clock Tower buildings thinking about how we’re going to improve Craccum for the next semester. Running out of random lectorials when you’re confronted with talking about leadership  isn’t a good looking when you’re running a magazine for a start. Rest assured though because we’re working on that.

Verdict: It turns out we went to a tutorial – that wasn’t great planning. To the CLASSICS 214 lecturer, I hope you remembered seeing us at the back of the room and then seeing that we were no longer there seconds later. We hope it will make you change your policy on group work.