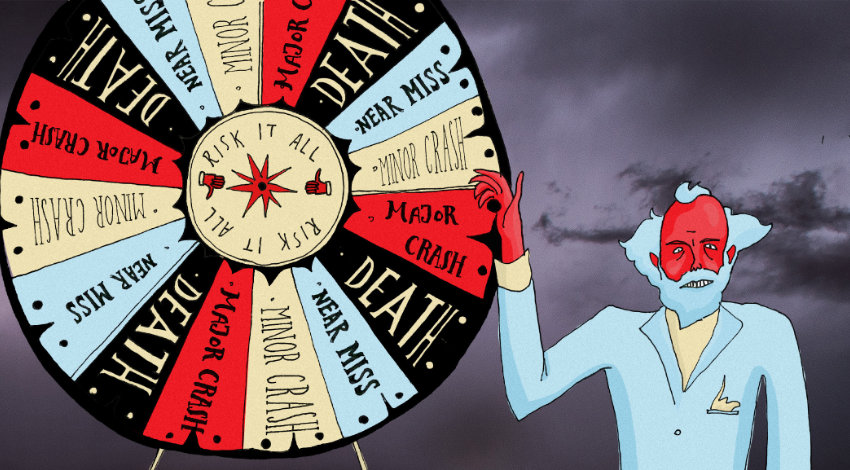 Wasn’t 2008 great? You’d come home from a long day at school, turn on Sticky TV, watch Fairly Odd Parents and be treated to your mother getting a face full of glass because her fucking kids couldn’t clean up after themselves. Oh, to be young again, it was a simpler time. ACC had decided on the darkly ironic vision of jumpscaring people into public safety, and they were gonna take every page from Final Destination’s book to do so, goddamnit. But not only were ACC on the warpath for advertising-slot friendly trauma, we were in a golden age of driving & alcohol safety adverts and didn’t even know it. It was a beautiful time. It was a time before Ghost Chips softened our hearts. In order to draw out these precious memories of PSAs past, I’m ranking the top eight of NZ’s most infamous public safety advertisements, and we’re all gonna bask in the sweet trauma of yesteryear.

Audience Trauma: 6/10 – While it’s not a heart stopper, this was ACC’s first successful attempt to fuck up your ad break. You were lulled in by the innocuous Fruity Bar and its promises of nutrition for your loved ones, and then boom – glass all up in this poor woman’s face.
Quotability: 2/10 – It’s a visual piece, like Suspiria – the horror doesn’t rely on dialogue to sell its message.
Artistry: 7/10. It wasn’t exactly easy to go back to Sticky TV after Sharon got glassed, hmm? Hell, even the Americans know about this one.
Total: 15 points

Audience Trauma: 6/10– 3 points from the grotesque leg snap, another 3 from him being able to own a home in his early 30s.
Quotability: 0/10. UhhHUhHHHHHhhhhh, after fucking his leg up doesn’t exactly lend itself to the public lexicon.
Artistry: 2/10. Gonna need more than a broken leg to put fear into my heart, ACC.
Total: 8 points

Audience Trauma: 10/10 – The unquestioned MVP in this regard, find someone who saw that commercial who didn’t shit out their spine once they saw the titular inebriated uncle merry-go-round his nephew into the drywall.
Quotability: 4/10 – Drunk Uncle only consists of on-the-piss laughs and a relative yelling GET OUT at the titular drunkard, but extra points for the forcefulness of the rebuke.
Artistry:  8/10 – It stayed with you, right? Fucking stayed with me. I may or may not laugh whenever this comes on air nowadays, but the initial head slam always shuts me up for a second.
Total: 22 points

Audience Trauma: 8/10 – The last contribution from ACC on this list, this was their strongest effort to date. It’s swift but brutal – John Malemodel, dumb as shit, steps on the wet tiles, slips, and breaks his neck instantly. You feel the thud in your throat. After this, shower mats for LIFE.
Quotability: 1/10 – None to speak of – it’s presented as a simple commercial with implied shower sex, there’s not much more to it. The thud is what matters.
Artistry: 7/10 – Wes Craven actually complained to Helen Clark and said he pissed himself a little bit.
Total: 16 points

Audience Trauma: 1/10 – We all laughed at this one. Once the guy realises that Nige is dead, they lost us to the laughs.
Quotability: 8/10 – What! WHAT! WHAT? Stop staring AT ME! GET THE HELL OFF ME! GET OFF ME, NIGE! AAAAAHHHHHH
Artistry: 4/10 – They got the shadows right. And Nige does look dead as fuck!
Total: 13 points

‘Could you live with yourself? – Nightmares’ (Fire and Emergency NZ)

Audience Trauma: 10/10 – Fire alarm sales went up 200% at the time of release, as the multiple showings of the PTSD-laden father spoke to a primal fear within the audience.
Quotability: 2/10 – The directness of the spoken words isn’t memorable, it’s the actor’s eyes that sell this one.
Artistry: 9/10 – Possibly the most effective community outreach the NZ Fire Service have had in years, if not ever.
Total: 21 points

Audience Trauma: 6/10 – I never really liked this one, but I know plenty of people that were sufficiently creeped out by this – I thought the guy looked too much like the small hand guy from Scary Movie 2, but I see why it worked for others.
Quotability: 4/10 – No dialogue to speak of, but the off-key circus tune is unsettling enough to work itself a few points on the ladder.
Artistry: 7/10 – The clicking of the wheel as it approaches death? Wooh, child.
Total: 17 points

While writing this, I ended up getting spooked by the various other PSAs New Zealand has seen it its time. Our drink driving ones are fucked up! However – Ghost Chips not only become one of our favourite catchphrases, it was specifically created because oddly enough, shock-and-awe trauma across a 30 second advert doesn’t induce societal change. But I thank them for trying! My childhood wouldn’t have been the same without the proud efforts of ACC and co. to maim and kill fictional characters into teaching us dire lessons.

With that in mind, congratulations to Drunk Uncle! The Blood Relative Beatdown is #1 on this list; as to this day, I cannot see that commercial without averting my eyes the moment he throws the kid into warp speed. Reminder: you used to see this commercial at the same time as the Erin Simpson show.