In Sickness and in Health: How do the past’s virus movies stack up?

Sanjana Khusal dons a hazmat suit and proceeds into the pandemic scenarios of old.

It may sound counterintuitive, but watching pandemic films has been incredibly comforting. It’s lovely knowing that we aren’t being chased by zombies, having to go back in time to convince people the world is going to end or be in a world without any electricity. I’m not sure about you but I don’t even know how to use a radio, much less own one. If we didn’t have the internet, I’m pretty sure we would all be going insane. Luckily, we are in a very healthy environment for watching films about the world going to shit. Time to lock your doors, put your teddy out to guard all exits, cuddle a roll of toilet paper, and get ready to [re]experience the iconic, unreal pandemics.

We’re starting this list with an oldie but a goodie. George A. Romero’s debut film, Night of the Living Dead, has since become a cult classic. It can be traced back as the original zombie film and has offered a template for many slasher flicks like Halloween and Nightmare on Elm Street. I’m sure you can guess the plot: a woman is attacked by a dead guy, screams really loudly (RIP headphone users) and runs into an abandoned house, other people show up, they argue, a child zombie eats dad and kills mom and then there’s one person. Plot twist: the red necks mistake him for a zombie and shoot him.

With equal chances of getting eaten, it was the man with common sense who lived the longest. The best way to defeat the virus is social distancing. In other words, stay the fuck away from me.

An eerily similar but more complex is the 2007 Spanish film, [•REC]. You may be familiar with the 2008 American remake, Quarantine, starring Dexter’s sister. This found footage film follows a reporter, policemen, and residentials in an apartment building. The film follows reporter, Angela Vidal, and her cameraman as they accompany emergency workers to an apartment building. All the residents and workers get locked in the building after an infected old woman attacks a policeman. The co-directors, Paco Plaza and Jaume Balagueró were determined to make a realistic film. Tv presenter and actress, Manuela Velascowas cast as the late-night reporter.

I guarantee this film will have you at the edge of your seat. The moment that stands out to me is the discussion on where the virus came from. One of the residents, Cesar, is eager to blame the Japanese and Chinese residents for bringing a virus. The underlying racism is bleak and darkly accurate. Many of us who have been following America’s news will know that Donald Trump has been calling the coronavirus, “the Chinese virus.” In this particular case, the medicals confirm that this cluster originates from a dog, one of the residences pets, who spontaneously became violent. With three sequels, this franchise could make for a good midnight marathon.

Many of the films on this list will feature zombies. Many of us are familiar with the tower of zombies, clambering over one another to get over the wall. Whether they are fast or slow, they make for an excellent challenge for humanity. In this case, these zombies are fast, like ‘Edward Cullen running to protect Bella Swan’ fast. If the Coronavirus gave us an inhumane desire to feast on one another, I pray for all those couch potatoes. The most exercise we did was the “chewing” chin up while thinking about doing exercise with Chris Hemsworth later.

Gerry travels the world and eventually ends up in Jerusalem, which is considered the safe zone. We’re fortunate to have such a forthright, organised leader like Auntie Jacinda. Who knows what New Zealand would’ve ended up without her. Our way of beating the virus hasn’t been through acts of violence but good old fashion lazing around the house and doing nothing. Who knew I’d be praised for sitting at home and watching movies all day.

Yes, it’s another zombie film. It is for a very good reason. This movie is about love. I’m sure every girl has dreamt of dating a zombie. Or maybe that’s just Tina Belcher. Too bad Covid-19 didn’t give us all a hot undead boyfriend. That’s probably a good thing considering he’ll eat your current boyfriend’s brains. I wouldn’t suggest kissing any lovesick puppies at the moment; they could be actually sick. Instead, the most intimate thing we can do is “accidentally” text an ex out of guilt he could be having a shitty time in isolation. I’m weak, don’t judge me.

Finally, we have the film I’m sure you’ve been waiting for: Contagion (2011). In a flicks.co.nz user review written in 2012, the viewer “found the bat and pig mutant virus a little hard to swallow (pardon the pun).” Who knew that would be one of the most accurate aspects of this fictional pandemic. Rather than create a fantastical work violated by monsters and ghouls, this film takes a global situation and attempts to foreshadow the world which could come. With a virus that can live on the surface for months, so many little actions like preparing food, shaking hands, touching glasses, wiping your face are highlighted as deadly.

Alan Krumwiede, played by Jude Law, acts as the face for fake news. He runs a blog and falsifies a cure for the virus as a way to gain media publicity. It’s not hard to find many real-life analogues here, far too many in the seats of power. The Columbia University Mailman School of Public Health asked the cast of Contagion to narrate a few PSA’s about Covid-19. Matt Damon who plays the man immune to the virus, says, “that was a movie. This is real life. I have no reason to believe I am immune to COVID-19 and neither do you.” No one is immune. The announcements were vetted by public health officials and scientists.

These films are no biographies, they’re fantasy. Films are meant to be learned from, not recreated. 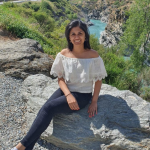